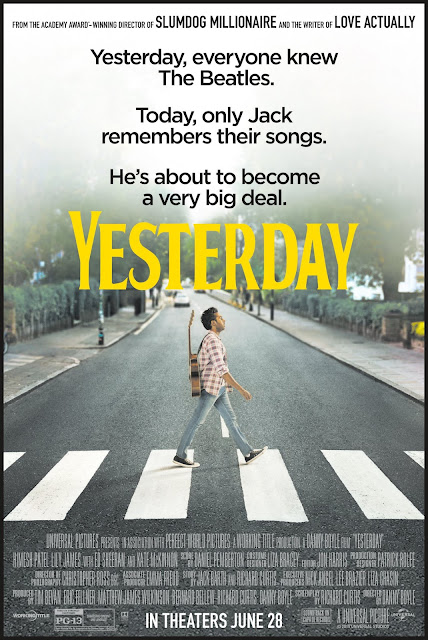 
The Beatles are the most influential rock band of all time. Although they aren't my favorite or the best (those titles both belong to Led Zeppelin), they are definitely one of the best, & their sounds are incredibly lovely to this day.

Yesterday doesn't always hit the high notes, but it's a solid tribute to The Fab Four. The film follows Jack Malik (Himesh Patel), a struggling singer-songwriter in the British seaside city of Lowestoft. Despite encouragement from his manager & childhood friend Ellie Appleton (Lily James) to continue on with his career, Jack finds himself disillusioned with the lack of support, & strongly considers leaving his music career behind.

One night, Jack goes on a bike ride. While on his bike ride, the electricity goes out. A few seconds later, Jack is hit by a bus. A few seconds after that, the electricity goes back on. When Jack wakes up & is released from the hospital, he notices that something is different, as many of his Beatles references are lost by everyone. It eventually dawns on Jack that no one else on Earth remembers The Beatles. After the momentary shock, Jack comes up with an idea: perform the entire discography of The Beatles & claim it as his own work.

When Jack performs one of The Beatles' songs on local television, he meteorically rises to superstardom, eventually becoming the opening act of Ed Sheeran (Ed Sheeran), further thrusting him into the spotlight. He is eventually signed by Sheeran's agent, Debra Hammer (Kate McKinnon). But the more popular Jack becomes, the more he must think about his relationship with Ellie, who has been right by his side the whole time.

The cast is amazing. Himesh Patel gives a superb breakout performance. Lily James continues to show that she is one of the best young British actresses today. Ed Sheeran shows that he can be likable for once. And Kate McKinnon is very funny.

Danny Boyle's direction is great. Although Boyle never fully explores the intriguing premise that drives the film, Boyle overcomes that with a warm tone throughout & a steady hand during the musical sequences.

And the screenplay by Richard Curtis & Jack Barth is very good. Although the characters need more development & the dialogue is a bit too on-the-nose at some points, the plot is immensely intriguing.

This is a solid fantasy rom-com. Although it doesn't get anywhere near where it could've been, it gets by with a little help from some friends.