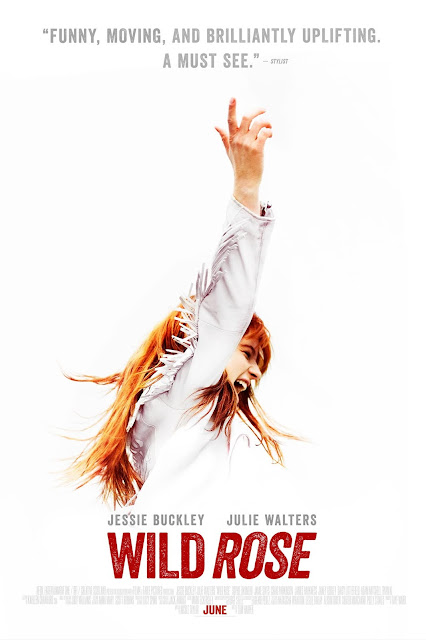 
I've said it before, & I'll say it again: I HATE COUNTRY MUSIC. All of them sound the exact same: men drinking a cold beer in their pickup trucks singing about their woman & how much they love rural America. The only country singers I've ever liked are Johnny Cash, Waylon Jennings, & Kacey Musgraves. Other than that, I don't like it.

But Wild Rose has done something rare: it made me not only like country music, but love it. And other than that, it's an absolute wonder of a film. The film follows Rose-Lynn Harlan (Jessie Buckley), a young woman in Glasgow. Rose-Lynn has just been released from prison for a drug charge, & returns to her home, where her mother Marion (Julie Walters) has taken care of Rose-Lynn's 2 children, Wynonna (Daisy Littlefield) & Lyle (Adam Mitchell). When not in prison, Rose-Lynn is an avid country fan, & yearns to be a famous country singer in Nashville. However, her tendency for debauchery gets in her way.

Rose-Lynn gets a job as a housekeeper for the family of Susannah (Sophie Okonedo). While housekeeping, Rose-Lynn sings multiple country songs, & her voice surprises Susannah, who believes that Rose-Lynn has a great future in country music. Susannah decides to help Rose-Lynn get out there & follow her dreams. After this, Rose-Lynn is steadfastly working towards her goal. But the fear that she might do this while risking whatever semblance of a relationship with her children lulls over her.

The cast is phenomenal. Jessie Buckley is electrifying. She puts 200% into her performance, & also has the voice of an angel. Julie Walters gives one of her best performances. And Sophie Okonedo is at her best in years.

Nicole Taylor's screenplay is amazing. For such a familiar premise, the plot feels incredibly fresh. The characters are well-realized, & the dialogue is incredibly realistic.

And the music is phenomenal. The songs are all incredibly well-written, & they are used to their full extent through Jessie Buckley's soul-shattering voice.

This is one of the best films of the year so far. It's an incredibly fresh look at a rags-to-riches story, led by a star-making performance by Jessie Buckley.

Wild Rose was seen by me at The Maple Theater in Bloomfield Township, MI on Sunday, July 7, 2019. It is currently in 2 theaters in the Detroit area: the AMC Livonia 20 in Livonia, MI; & the State Theatre in Ann Arbor, MI. Its runtime is 101 minutes, & it is rated R for language throughout, some sexuality & brief drug material.
at July 21, 2019