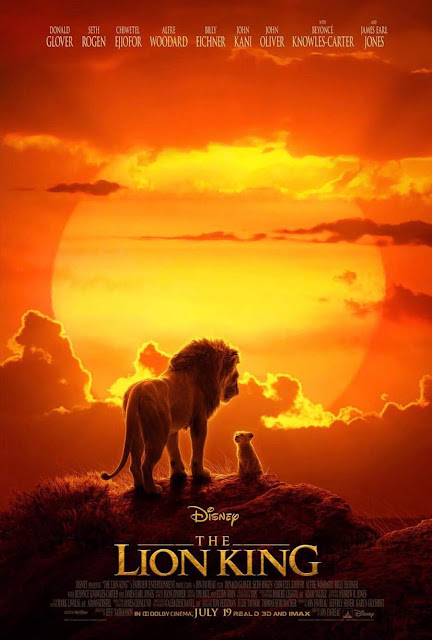 The Lion King (1994) is, by far, the greatest animated film ever made. The opening sequence is still emotionally powerful after 25 years, & the animation is timeless. And as someone who has only watched it for the first time recently, I can say that I feel connected to it as much as someone who has seen it many times since they were a toddler.

However, The Lion King (2019) is nowhere near the original in terms of quality, & is ultimately a soulless live-action remake. The film follows Simba (Donald Glover as an adult, JD McCrary as a child), a lion in the Pride Lands of Africa. His father Mufasa (James Earl Jones) is the king of the Pride Lands, assisted by the hornbill Zazu (John Oliver) & the mandrill Rafiki (John Kani), & with his queen Sarabi (Alfre Woodard) by his side. However, Simba's uncle Scar (Chiwetel Ejiofor) is secretly planning to usurp the throne from Mufasa with the help of Shenzi (Florence Kasumba), Kamari (Keegan-Michael Key), & Azizi (Eric Andre), three hyenas. Nevertheless, Simba yearns to be king one day, & he is betrothed to Nala (Beyoncé as an adult, Shahadi Wright Joseph as a child), his best friend.

One day, Scar sets a trap for Simba & Mufasa as a large herd of wildebeest stampede by Pride Rock. Simba is lured into the stampede, leading Mufasa to come & save him; however, although he saves Simba, Mufasa is unable to get back up off the ledge. Mufasa asks Scar for help, but Scar lets him fall off the ledge, & is killed in the stampede. Scar blames Simba for his father's death, & tells him to run away & never return. Scar sends the hyenas after Simba in a plan to kill him, but they fail in their quest.

Simba runs all the way to a desert, where he collapses. He is rescued by Timon (Billy Eichner) & Pumbaa (Seth Rogen), a meerkat & a warthog, respectively, who are best friends. They take Simba in & introduce him to their philosophy of "hakuna matata," which means "no worries." Simba grows up under this philosophy, & finds himself to be content with his carefree life. But a chance encounter with Nala will lead Simba to reconsider his future & possibly return to the Pride Lands to take back his kingship.

The cast is great. Donald Glover, Beyoncé, James Earl Jones, & Alfre Woodard are all great. Billy Eichner & Seth Rogen steal the show. However, Chiwetel Ejiofor is not a great fit, never fully capturing the essence that made Jeremy Irons so imposing in the original film.

Jon Favreau's direction is underwhelming. While he does show a keen visual eye, Favreau is never able to get near as much natural emotion from the audience as Rob Minkoff did with the original film.

Jeff Nathanson's screenplay is mediocre. The plot is exactly the same as the original, & while that's not inherently bad, there is nothing new given to the characters, ultimately making the film feel soulless.

The visual effects are polarizing. For the most part, the animals are incredibly well-realized. However, the lions have no emotion whatsoever, making them feel very unrealistic.

And the music is terrific. The score by Hans Zimmer still has a timeless quality, & the songs feel as fresh as ever.

This is a huge disappointment. Although there are things to like about it, it's basically a glorified Disney Nature documentary, & that's definitely not a compliment.