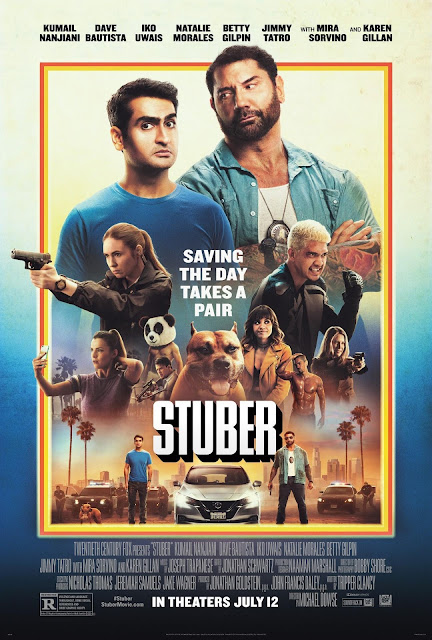 
Cop comedies have been around in cinema for ages: some good (21 Jump Street & 22 Jump Street), some bad (Stop! Or My Mom Will Shoot). Although they aren't as successful as they once were, they're still enjoyable from time to time.

Stuber isn't anywhere near perfect, but it's definitely hilarious & enjoyable. The film follows Stu (Kumail Nanjiani), a mild-mannered Uber driver in Los Angeles. Stu also works at a sporting goods facility, where he has to deal with co-workers like Richie Sandusky (Jimmy Tatro). However, he is planning on leaving his job at the sporting goods facility to start up a women's spin biking gym with his best friend/crush Becca (Betty Gilpin).

One day, Stu picks up Det. Vic Manning (Dave Bautista), a detective for the Los Angeles Police Department. Vic is after Oka Teijo (Iko Uwais), a notorious drug lord who killed Vic's partner Det. Sara Morris (Karen Gillan) six months earlier. As a result of her death, Vic has been adamant in finding him, although Capt. Angie McHenry (Mira Sorvino) has told him to take a break from the case. Vic would do the task himself, but as a result of LASIK surgery earlier that day, he cannot drive, so he forces Stu to drive him around looking for Teijo in the Uber that his daughter Nicole (Natalie Morales) called for him for her art gallery that night.

While driving through Los Angeles, Stu & Vic constantly bicker: Stu berates Vic for his toxic masculinity & neglect towards his daughter, while Vic berates Stu for not being a real man. But they must put aside their differences if they have any chance at finding Teijo.

The cast is amazing. Kumail Nanjiani continues to show that he is one of the funniest actors in Hollywood right now. Dave Bautista also shows off the great comedic timing that made him such a standout in the Marvel Cinematic Universe. The rest of the cast is also hilarious, but it's Nanjiani, Bautista, & their chemistry that truly shine.

Michael Dowse's direction is great. Although his handling of the action sequences isn't the best, he definitely continues to show a great eye for comedy.

And Tripper Clancy's screenplay is very good. The plot is definitely formulaic, & some characters aren't fully realized, but the dialogue is often very humorous.

This is a solid action-comedy. Although it is nowhere near a 5-star ride, it has just enough for me to give a positive rating.

Stuber was seen by me at an advance screening at the MJR Troy Grand Digital Cinema 16 in Troy, MI on Wednesday, July 10, 2019. It is in theaters everywhere. Its runtime is 93 minutes, & it is rated R for violence & language throughout, some sexual references & brief graphic nudity.
at July 22, 2019