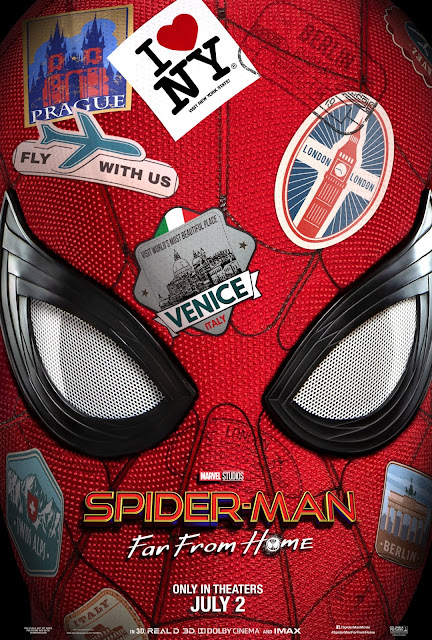 
Since I was a kid, Spider-Man has always been my favorite superhero, mostly because he was younger, which made him more easy to relate to me. (I wasn't much of a comic person, however). As for the films, Tobey Maguire was a good Peter Parker, but a not-so-good Spider-Man; Andrew Garfield was a not-so-good Peter Parker, but a good Spider-Man; & Tom Holland is great at both. Also, the Miles Morales version Spider-Man was portrayed terrifically by Shameik Moore in Spider-Man: Into the Spider-Verse.

Spider-Man: Far From Home is a terrific epilogue for the Infinity Saga of the Marvel Cinematic Universe. The film follows Peter Parker/Spider-Man (Tom Holland), who is trying to adjust not only to the world after The Blip, the resurrection of everyone lost in The Snap, but also the death of his mentor, Tony Stark/Iron Man. In order to accommodate the students who returned in The Blip, the Midtown School of Science & Technology has restarted the entire school year. The school is also organizing a 2-week trip to Europe, supervised by teachers Roger Harrington (Martin Starr) & Julius Dell (J.B. Smoove), where Peter plans to take a vacation from heroism & finally express his romantic feelings to Michelle "MJ" Jones (Zendaya). Romantic feelings are also being expressed by others in Peter's life, including by his best friend Ned (Jacob Batalon) towards Betsy Brant (Angourie Rice), & also by Harold "Happy" Hogan (Jon Favreau) towards Aunt May (Marisa Tomei), much to Peter's chagrin.

The group arrives in Venice as a water creature wreaks havoc on the city. However, it is stopped by Quentin Beck/Mysterio (Jake Gyllenhaal), a man from another Earth. The water creature was the Water Elemental, one of the four Elementals. The Air, Water, & Earth Elementals have all been destroyed, but the Fire Elemental is still out there. They already destroyed Beck's Earth & killed his family. Nick Fury (Samuel L. Jackson) & Maria Hill (Cobie Smulders) have taken Beck on as a member of the team, & decide to have Peter join him in the fight. However, Peter still wants to relax & enjoy Europe. As a result, Fury pulls some strings that have the group go to Prague, where the Fire Elemental will show. Over time, Peter & Beck bond. But there is a mystery (pun intended) to Beck, one that will throw Peter's Europe trip even more out of the loop.

The cast is terrific. Tom Holland further proves that he is the best Spider-Man. Samuel L. Jackson is still Samuel L. Jacksoning perfectly. Zendaya further shows that she has a lot of acting talent. And Jake Gyllenhaal is spectacular.

Jon Watts' direction is excellent. Watts continues to show a great eye for the quieter scenes that are more coming-of-age in style, & improves on his handling of action sequences.

The screenplay by Chris McKenna & Erik Sommers is amazing. The plot is thrillingly intriguing, the characters are well-written, & the dialogue is superb & humorous.

And the visual effects are incredible. The CGI has no flaws whatsoever with the explosions & the creatures, & the practical effects are terrific as well.

Spider-Man: Far From Home was seen by me at the MJR Troy Grand Digital Cinema 16 in Troy, MI on Wednesday, July 3, 2019. It is in theaters everywhere. Its runtime is 129 minutes, & it is rated PG-13 for sci-fi action violence, some language & brief suggestive comments.
at July 19, 2019