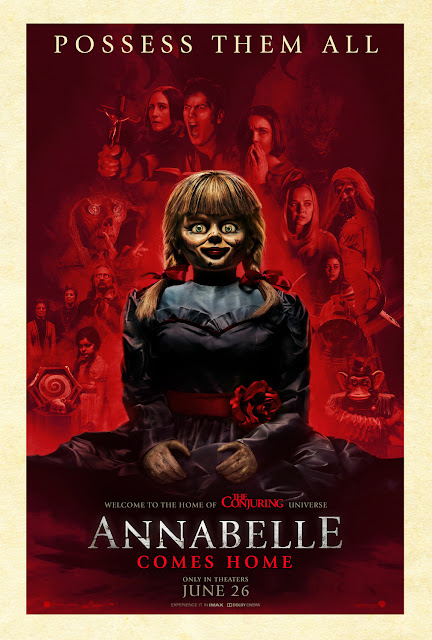 The Conjuring Universe has been a mixed bag: The Conjuring & The Conjuring 2 were both great, while The Nun was mediocre, & The Curse of La Llorona was a disaster. I have not yet seen Annabelle or Annabelle: Creation.

Annabelle Comes Home, while not the best in the franchise, is a vast improvement over the previous 2 films. Set in 1972, the film follows Mary Ellen (Madison Iseman), a teenager in high school. Mary Ellen has been hired by famed demonologists Ed (Patrick Wilson) & Lorraine (Vera Farmiga) Warren to babysit their tween daughter Judy (Mckenna Grace) while they investigate a case. Judy's birthday is coming up soon, but many people are not going to her party due to the revelation in the local newspaper about what Ed & Lorraine do for a living.

One Friday, after school, Mary Ellen & Judy are surprised by Daniela Rios (Katie Sarife), a friend of Mary Ellen's who has come uninvited. Daniela's father passed away, & she is curious about speaking to the dead. As a present for Judy, Daniela gives her a pair of roller-skates. While Mary Ellen & Judy go out to try them out, Daniela sneaks around looking for keys to the forbidden room where the Warrens keep the possessed items. She finds them, & despite being told not to enter the room, she does so anyway. She touches several possessed items, & opens the case containing Annabelle, a possessed doll which is the most harmful of all of the items in the room. Daniela accidentally leaves it unlocked.

Not long after, Annabelle is unleashed, bringing in several other spirits with her. Mary Ellen, Judy & Daniela must defeat the spirits & put Annabelle back in the case & lock her up before even more bad things occur.

The cast is terrific. Madison Iseman shows a lot of talent here, & I think she will have a solid career. Mckenna Grace shows once again that she is one of our best child actresses. Katie Sarife is great. And although Vera Farmiga & Patrick Wilson aren't in the film for long, their chemistry definitely shines through.

Gary Dauberman's direction is great. There are some flaws that show that this is his directorial debut when it comes to atmosphere, & he does overuse jump scares, but he ultimately does bring a lot of terror & fun to the table.

And the screenplay by Gary Dauberman & James Wan is very good. Although the plot is definitely formulaic, & the characters aren't very well-developed, the dialogue is very well-written.

This is a solid horror film. Although it isn't as scary as it should be, it has just enough frights & fun to make it worthwhile.

Annabelle Comes Home was seen by me at the MJR Marketplace Digital Cinema 20 in Sterling Heights, MI on Friday, June 28, 2019. It is in theaters everywhere. Its runtime is 106 minutes, & it is rated R for horror violence & terror.
at July 09, 2019