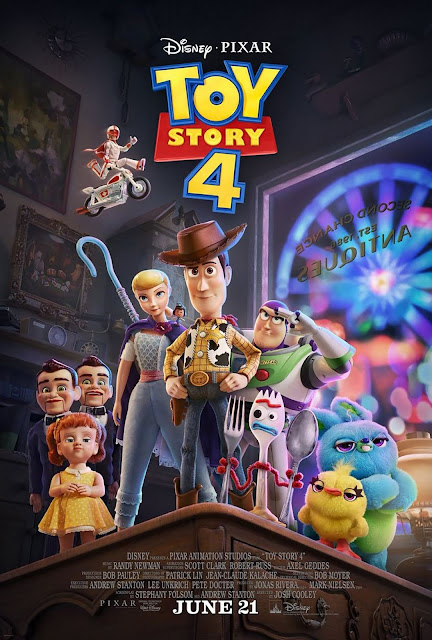 
The Toy Story films are not only some of the best Pixar films ever made, but they are some of the greatest animated films of all time. Each of the films were incredibly groundbreaking in animation, spectacular scope, & packed with emotion.

When I heard that Toy Story 4 was coming out, I had mixed feelings: on one hand, I knew that it would be good, as Pixar has only made one bad film (Cars 2). But on the other hand, it felt unnecessary; Toy Story 3 was the perfect conclusion to the franchise, as everything was tied together, & it went out with an emotion-filled bang.

But my doubts were all for nothing, as Toy Story 4 is a terrific extension (& possible ending) to the franchise. The film continues the story of Woody (Tom Hanks), the leader of a group of toys once owned by Andy (John Morris & Jack McGraw), & now owned by Bonnie (Madeleine McGraw). Woody, along with Buzz Lightyear (Tim Allen), Jessie (Joan Cusack), Rex (Wallace Shawn), Hamm (John Ratzenberger), Slinky Dog (Blake Clark), Mr. Potato Head (Don Rickles), & Mrs. Potato Head (Estelle Harris), along with Dolly (Bonnie Hunt), Trixie (Kristen Schaal), Buttercup (Jeff Garlin), & Mr. Pricklepants (Timothy Dalton), are happy with their lives as Bonnie's toys. Bonnie is scared about entering kindergarten, so Woody sneaks into her backpack for orientation to keep an eye on her. When Bonnie gets upset, Woody sneakily brings art supplies that were thrown into the trash, along with a spork, to Bonnie. Bonnie uses the spork & the supplies to create a new toy she calls Forky (Tony Hale).

When Bonnie returns home, Woody finds that Forky has come to life in Bonnie's backpack. Woody introduces Forky to the toys, but Forky is convinced that he is trash & not a toy, & proceeds to continually throw himself into the trash. As Forky becomes Bonnie's favorite toy, Woody takes it upon himself to stop Forky from throwing himself into the trash.

Before the school year starts, Bonnie's mom (Lori Alan) & dad (Jay Hernandez) take Bonnie on a road trip. During the trip, Forky throws himself out the window & Woody jumps out to find him & bring him back. On their journey to the RV park where Bonnie & her parents are at, Woody helps Forky finally realize that he is a toy & not trash.

Before they arrive at the park, however, Woody is distracted by a lamp in a store: the lamp of Bo Peep (Annie Potts), a former toy friend of Woody's who was sold 9 years earlier, along with her sheep, Billy, Goat, & Gruff (Emily Davis). They enter the store, but are seen by Gabby Gabby (Christina Hendricks). Gabby Gabby offers to take them to Bo, but she has ulterior motives for it, & in the process, Forky is captured by Gabby Gabby while Woody escapes. Meanwhile, Buzz looks for Woody & Forky, & meets Ducky (Keegan-Michael Key) & Bunny (Jordan Peele), 2 carnival toys.

Woody finally finds Bo, who is now a lost toy. After some persuading, Bo agrees to help Woody find Forky & return to Bonnie, along with the help of pocket toy cop Giggle McDimples (Ally Maki), & Canadian toy stuntman Duke Caboom (Keanu Reeves). But the journey will trigger a yearning for a fresh start in Woody.

The cast is superb. Tom Hanks, Tim Allen & Annie Potts bring so much to their voice roles, & although we can't physically see them, we still empathize with their performances & their emotions. Keegan-Michael Key & Jordan Peele provide some of the funniest lines. And Keanu Reeves is awesome, as always.

Josh Cooley's direction is excellent. Cooley provides a warm-hearted atmosphere throughout, along with a great visual animated style.

This is an incredible animated film, & definitely one of the best animated films of the decade. It may have seemed unnecessary, but unnecessary it is not. It is the logical conclusion for the franchise, & it is an emotional one for sure.