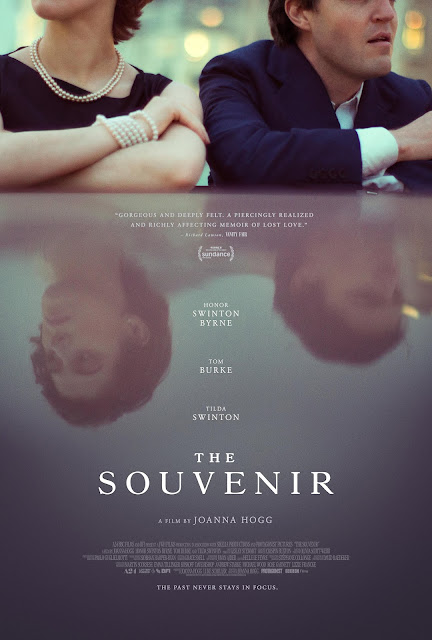 
How do we look at moments in our past that were not good? Do we look at them for what they truly are? Or do we think of them differently, tell ourselves that they were good moments, in order to spare ourselves from the pain & anguish we've kept hidden away for years? I don't know how exactly I've looked back at mine.

The Souvenir is an incredibly well-made look at one of those moments. Set in 1980s London, the film follows Julie (Honor Swinton Byrne), a young film student. Julie wants to write & direct films about stories that take place outside of her privileged, upper-class life, like in the docks in the north of England. Her mother Rosalind (Tilda Swinton) is concerned about Julie, but Julie brushes off her concerns.

At a party, Julie meets Anthony (Tom Burke), an older man who works for the Foreign Office. Anthony is much like Julie, as he is also very privileged & upper-class, & is the epitome of an Oxbridge man. He introduces her to new ideas, films, artworks, & many other things, eventually becoming a major part of her life, eventually moving in with her, as the romance blooms like a lovely flower.

The cast is terrific. Honor Swinton Byrne gives the most captivating breakout performance I've seen in years. She embraces Julie's vulnerability, self-doubt, ambition, & devotion at every moment, & it is the best dramatic performance of the year so far. Tom Burke is superb, & gives the most realistic portrayal of a toxic person in a toxic relationship that I've ever seen. And Tilda Swinton shows & says so much with little screen time.

Joanna Hogg's direction is phenomenal. As this is based on her experiences in the early 1980s, this is a very personal work for Hogg. And it shows, as she helms the film with such intimate care & framing.

Joanna Hogg's screenplay is incredible. The plot perfectly weaves back & forth like a series of fragmented memories, the characters are so impeccably well-developed, & the dialogue is so wonderfully realistic.

The Souvenir is one of the best films of the year, & quite possibly of this decade. It's a heart-wrenching look at a toxic relationship & how we look back on them, whether it be for what they were or what we think they were, which are almost always 2 completely different things.

The Souvenir was seen by me at the Landmark Main Art Theatre in Royal Oak, MI on Sunday, June 9, 2019. It is currently in 1 theater in the Detroit area: the State Theatre in Ann Arbor, MI. Its runtime is 120 minutes, & it is rated R for some sexuality, graphic nudity, drug material & language.
at June 16, 2019