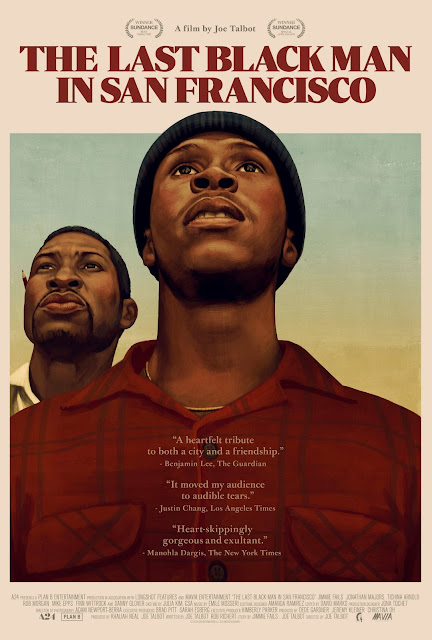 
Detroit. Boston. San Francisco. Atlanta. Philadelphia. New York. Washington D.C. All of these cities, along with hundreds more in the United States, have been plagued by gentrification. Sure, gentrification may sound nice, with the promise of updating the decaying neighborhoods, but what else do you really get out of it besides that & middle-class white people moving in? You not only lose the predominantly marginalized communities that made it so great, but you lose the culture that made it home while it wasn't at its best.

The Last Black Man in San Francisco is an incredibly powerful look at gentrification, but it is mainly a powerful look at a friendship & how it endures outside change. The film follows Jimmie Fails (Jimmie Fails), a young African-American man in San Francisco. Jimmie works as a nurse at a nursing home, & currently lives with his best friend Montgomery "Mont" Allen (Jonathan Majors), an aspiring playwright, & Mont's grandfather (Danny Glover), who is blind & relies on Mont to explain to him the visuals of films & TV shows. Together, Jimmie & Mont encounter various people throughout the day, including Wanda (Tichina Arnold), Jimmie's aunt; Bobby (Mike Epps), an old friend of theirs; Clayton (Finn Wittrock), a sly real estate agent; & Becca (Thora Birch), a woman who has grown to hate the city. But what they truly cherish is the old Victorian house in the Fillmore District that Jimmie & his father James Sr. (Rob Morgan) once lived in before they were forced out of it in the 1990s, the house that Jimmie's grandfather built in 1946 as "the first black man in San Francisco." Jimmie helps take care of the outside while Mont keeps an eye out for the tenants, who are more or less apprehensive of Jimmie's care.

One day, Jimmie & Mont discover that the tenants are forced to move out due to the death of the owner, which has caused infighting between the tenants & one of their sisters. Jimmie sees this as an opportunity to finally get back his house, which has been priced at $4 million. Jimmie & Mont move in to squat in it, finally getting a sanctuary for themselves in a rapidly gentrifying San Francisco. But this is more than just a house or a sanctuary for Jimmie: it's the last tie he has to San Francisco. It's the last tie he has to his home & his land, as he considers himself to be "the last black man in San Francisco."

Jonathan Majors gives the best supporting male performance of the year so far. Like Fails' performance, Majors' performance is also remorseful yet optimistic, but he is more theatrical in his persona, & it shows in one of the most powerful scenes of the film. His chemistry with Fails is also impeccable, as they truly feel like life-long friends, almost like brothers they never had.

Tichina Arnold has a small amount of screen time, but what she does with that screen time is wondrous. As Jimmie's aunt who has left San Francisco behind, she understands what Jimmie is going through, trying to keep his connection with the city he loves so dearly, but knows that San Francisco is tough, & it's not his fault if he leaves. Arnold portrays that mindset so perfectly, & she is so warm & engaging in her performance.

The rest of the cast, especially Danny Glover & Rob Morgan, give terrific supporting performances, filling in the rest of the colorful characters that populate the setting.

Joe Talbot's direction is stellar. Talbot, in his directorial debut, shows the empathy of John Cassavetes, the visual poetry of Barry Jenkins, & the sociopolitical eye of Spike Lee, which all come together to create a style that makes you surprised that it did not come from a seasoned veteran director. I definitely cannot wait for what Talbot does after this film.

The screenplay by Joe Talbot, Rob Richert & Jimmie Fails is wonderful. The plot is entirely fresh & original, never once feeling stale. The characters are incredibly well-written, feeling like random people you would encounter on the street. And the dialogue is so richly human, powerfully written, & incredibly poetic.

Adam Newport-Berra's cinematography is gorgeous. Newport-Berra's camerawork is so vibrant, glorious, & nothing short of visual poetry, as he lingers on the beauty of the faces of the characters & the places that populate the setting, & glides along through the town like a San Franciscan on a cable car.

David Marks' editing is terrific. Marks cuts the film with such immense style, but lets us linger in the moment, keeping us calm as we slowly engage ourselves with the characters. And that is what editing should do.

And Emile Mosseri's score is beautiful. The score is populated by trombones, trumpets, clarinets, flutes, saxophones, violins, & percussion, & all those combine for music that is lamentful for the past, yet hopeful for the future.