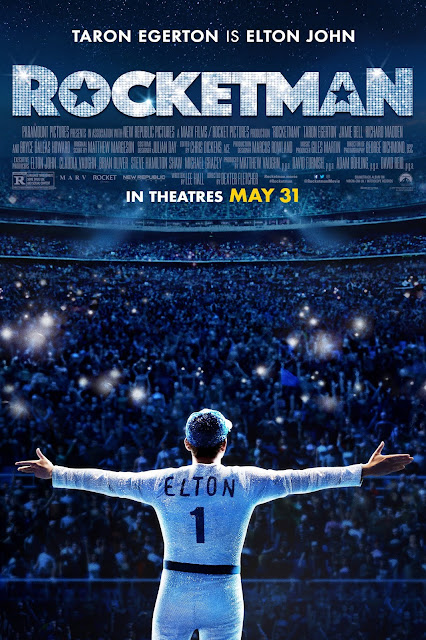 While Rocketman doesn't completely reach the heights of Elton John's career, it's a solid biopic. The film follows Reginald Dwight (Taron Egerton as an adult, Kit Connor & Matthew Illesley as a child), a young boy in Pinner, Middlesex, England. Raised by his mother Sheila (Bryce Dallas Howard) & grandmother Ivy (Gemma Jones) while his father Stanley (Steven Mackintosh) is absent due to his service in the Royal Air Force, Reginald shows that he has the musical talent of an absolute wunderkind. He eventually starts studying at the Royal Academy of Music in London. He then becomes influenced by rock artists, & joins a band called Bluesology.

Bluesology ends up backing up for an American jazz band, where Reginald realizes that he must change his name, form a new persona, & write some songs if he wants to be famous. He then changes his name to Elton John. Elton finds success under Dick James' publishing company & Ray Williams' management, & meets Bernie Taupin (Jamie Bell), an aspiring songwriter. They quickly form a friendship, with Elton's musical talent & Bernie's songwriting talent quickly merging together. Also, Elton starts to realize that he is gay, which Bernie accepts.

When Elton & Bernie create Your Song, they earn a performance at the Troubadour in Los Angeles, where they are met with absolute acclaim. At an afterparty at Mama Cass' house, Elton meets John Reid (Richard Madden), a music manager who also has romantic feelings toward Elton. But Reid has a toxic influence over Elton, & this will lead to a severe downward spiral for Elton.

The cast is terrific. Taron Egerton doesn't portray Elton John; he IS Elton John. His performance never once feels like an imitation (unlike Rami Malek as Freddie Mercury in Bohemian Rhapsody), & it has all the charm & talent we've all come to expect from Elton John. Jamie Bell is also superb as Bernie Taupin, & the chemistry between him & Egerton feels like a genuine life-long friendship. And the rest of the cast, especially Madden & Howard, provide great supporting performances.

Dexter Fletcher's direction is great. Although there are some moments where some standard biopic cliches come in, Fletcher overcomes this with so much ambition & visual style.

Lee Hall's screenplay is very good. Although the storyline does have too many of the standard biopic cliches, & some of the characters aren't well-developed, the dialogue is extremely well-written, & it isn't afraid to embrace its protagonist's sexual orientation (unlike Bohemian Rhapsody).

And the soundtrack is wonderful. So many of Elton John's brightest & best songs are on full display here, & they definitely drive the film forward.

Rocketman isn't perfect. It is somewhat afflicted by certain aspects that affect many biopics today, mainly music biopics. But it has ambition & competent filmmaking, something that many of them (like Bohemian Rhapsody) don't have. And that's a welcome surprise.

Rocketman was seen by me at the MJR Marketplace Digital Cinema 20 in Sterling Heights, MI on Sunday, June 2, 2019. It is in theaters everywhere. Its runtime is 121 minutes, & it is rated R for language throughout, some drug use & sexual content.
at June 16, 2019