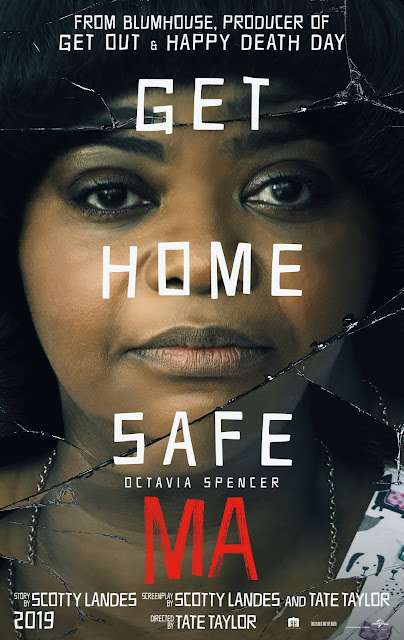 Sometimes, when we see something so incredibly bizarre, we must ask ourselves, "Damn ma, is it that serious?"

Well, in the case of Ma, it is that serious: seriously insane, & I loved every minute of it. The film follows Maggie Thompson (Diana Silvers), a teenage girl from San Diego. Maggie & her mother Erica (played by Juliette Lewis) have recently moved from San Diego to Erica's hometown in Ohio (which is the worst thing anyone does in this film). Not long after starting school there, Maggie befriends four people: Andy Hawkins (Corey Fogelmanis), son of Ben Hawkins (Luke Evans), the former popular guy at the high school back in the day; Haley (McKaley Miller); Chaz (Gianni Paolo); & Darrell (Dante Brown).

One day, they go out in search of someone to buy alcohol for them. They find Sue Ann Ellington (Octavia Spencer), a veterinary technician. Sue Ann declines at first, but then decides to buy it for them. The next time this occurs, Sue Ann invites them to drink in her basement, since she will be able to keep an eye on them so none of them will drive home drunk. Sue Ann has 3 rules: don't take the Lord's name in vain; don't go upstairs; & one of the kids must stay sober in order to drive everyone home. When Darrell asks, "You got any pizza rolls, ma?", Sue Ann likes that he called her Ma, which everyone starts to refer to her as.

Soon after, more people start to go to Sue Ann's basement, eventually making it the premier party spot in town. But Maggie starts to notice that Sue Ann is not what she seems to be, as her more despicable traits rise to the surface.

The cast is terrific. Octavia Spencer is at her most gleeful here, as she has so much fun in the role. Juliette Lewis does a great job, & it's great to see her again. And Diana Silvers is the standout of the teenage cast.

Tate Taylor's direction is excellent. Taylor makes sure that the film never takes itself too seriously, making it into a delightful piece of camp.

And the screenplay by Tate Taylor & Scotty Landes is superb. The plot is twisty & delightfully messed up, the characters are wickedly well-done, & the dialogue is iconic.

Ma isn't the best film ever made, nor does it try to be that. But it's the best piece of camp I've seen in years, & I can't wait for this to be a cult classic. Don't make Ma drink alone.

Ma was seen by me at the MJR Marketplace Digital Cinema 20 in Sterling Heights, MI on Friday, May 31, 2019. It is in theaters everywhere. Its runtime is 99 minutes, & it is rated R for violent/disturbing material, language throughout, sexual content, & for teen drug & alcohol use.
at June 12, 2019