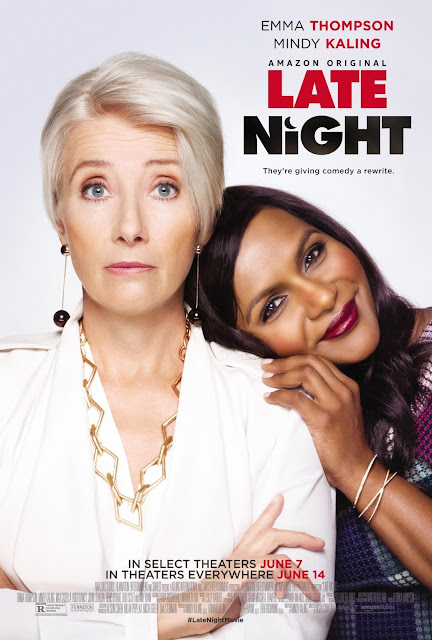 At the age of 17, I'm probably the youngest person in America that watches late-night talk shows. Here's how I feel about them: the only ones I like are Stephen Colbert (although he was better on Comedy Central as his alter ego) & Seth Meyers. Jimmy Fallon is ok, but I wish he would actually let his guests talk for more than 30 seconds without being interrupted by one of his annoying forced laughs. Jimmy Kimmel is not that funny, & James Corden is not only unfunny, but also has no likable persona.

Late Night, while rocky at points, is a solid look at the late-night talk show industry. The film follows Katherine Newbury (Emma Thompson), the host of Tonight with Katherine Newbury, the longest-running late-night talk show hosted by a woman. Katherine is married to Walter (John Lithgow), a former NYU professor with Parkinson's disease. Once a ratings hit, the show has now furiously dropped in ratings, as Katherine has refused to modernize, both in front of & behind the camera; Katherine refuses to engage in the antics that have made other late-night talk show hosts popular, & she has also come to be criticized for the lack of diversity on her writing staff, which is all-male, including Charlie Fain (Hugh Dancy); Tom Campbell (Reid Scott); Burditt (Max Casella); Reynolds (John Early); & Mancuso (Paul Walter Hauser). In order to fix this, Katherine sends her assistant Brad (Denis O'Hare) to find a woman to put on the staff, which he finds in Molly Patel (Mindy Kaling), an efficiency expert at a chemical plant in Pennsylvania who is a fan of the show & a budding comedienne.

One day, Katherine is informed by network head Caroline Morton (Amy Ryan) that this season will be her last, & that she will be replaced by Daniel Tennant (Ike Barinholtz), a younger, cruder comedian. In order to keep her job, Katherine demands that the writing staff makes her funny & relevant again. Molly finds this to be her chance to make her mark on the staff & prove that she isn't just a diversity hire. She does this by having Katherine completely change her persona by becoming more open about her thoughts & feelings. This could either end up going really well or really awful, but this might end up working.

The cast is terrific. Emma Thompson gives one of the best performances of her illustrious career. Mindy Kaling is also superb & charming. The rest of the cast gives great performances, but it's the chemistry between Thompson & Kaling that truly shines.

Nisha Ganatra's direction is great. Ganatra has some trouble with pacing, but she makes sure that the actors give their best performances & that the atmosphere stays warm throughout.

And Mindy Kaling's screenplay is very good. The plot does get too formulaic at times, & the characters outside of Thompson & Kaling's characters could use more development, but the dialogue is sharply written.

This is a solid dramedy. Although there are some moments that could've been better handled with a better writer & a better director, it's a nice little film.

Late Night was seen by me at the MJR Marketplace Digital Cinema 20 in Sterling Heights, MI on Friday, June 14, 2019. It is in theaters everywhere. Its runtime is 102 minutes, & it is rated R for language throughout & some sexual references.
at June 24, 2019