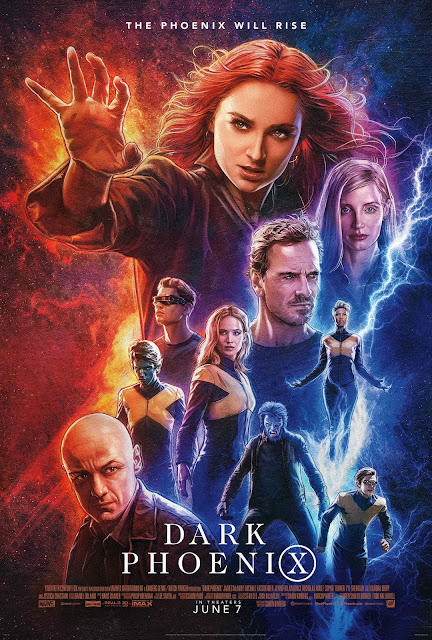 As the Fox X-Men Universe comes to a close as they have been purchased by the Mighty Mouse, we must look back on how it has been. The first two films were very good to great, then a major bump in the road with the next two films, then it regained its footing a bit once the prequels came in, & hit its peak with Deadpool, Logan & Deadpool 2, but has also shown some signs of regression with Apocalypse.

At first, Jean feels fine, & there is nothing that would show otherwise. However, it soon shows that the solar flare definitely affected her, as she suddenly starts attacking when pressured, & some more maniacal things arise to the surface. She eventually flies away from the X-Men, & is met by Vuk (Jessica Chastain), a member of the D'Bari, a shape-shifting alien race obsessed with the power she received from the solar flare, which wasn't a solar flare. She also meets up with Erik Lehnsherr/Magneto (Michael Fassbender), who has gone to a mutant island, to seek help. But her enhanced powers threaten to tear the X-Men apart.

The cast is mediocre. James McAvoy, Michael Fassbender & Jennifer Lawrence all do serviceable jobs, but they completely feel bored throughout the film. Sophie Turner is substandard. Jessica Chastain is incredibly wasted. And Alexandra Shipp is absolutely awful, as her accent is nothing short of horrendous.

Simon Kinberg's direction is terrible. In his directorial debut, Kinberg shows that he as incompetent at directing as he is at writing, with no ability to liven things up at all, no sense of visual style, & no sense of getting good performances out of his actors.

Simon Kinberg's screenplay is horrific. For a film that has been made once before to middling results, it wouldn't seem that hard to do better the second time around. However, this is not the case. The storyline feels incredibly rushed, the characters are not well-written, & the dialogue is some of the worst in recent memory.

And the visual effects are dreadful. For a superhero film with a budget of $200 million, you would expect that the CGI would be well done. You would be wrong. No amount of money nor reshoots would be able to fix the rushed & inconsistent CGI.

There's been many terrible superhero films before Dark Phoenix (most of which I haven't seen yet), & there will probably be more after Dark Phoenix. But I know for sure that as of right now, Dark Phoenix is the worst superhero film I've ever seen. This is the way a franchise ends: not with a bang, but with a sad, monotonous whimper.

Dark Phoenix was seen by me at the MJR Partridge Creek Digital Cinema 14 in Clinton Township, MI on Thursday, June 6, 2019. It is in theaters everywhere. Its runtime is 113 minutes, & it is rated PG-13 for intense sequences of sci-fi violence & action including some gunplay, disturbing images, & brief strong language.
at June 16, 2019