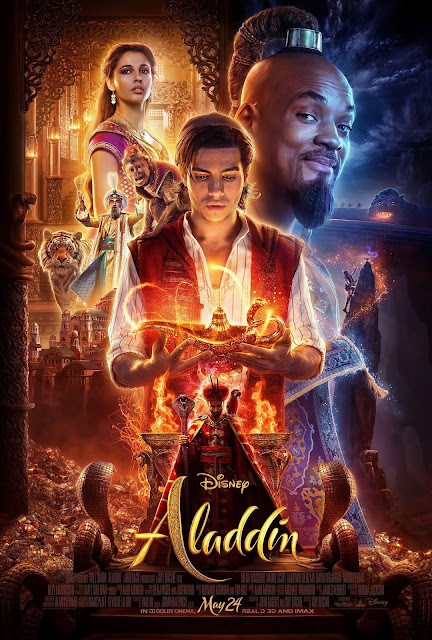 
I didn't see the original Aladdin until Memorial Day. I know, how could a kid have gone his whole life without seeing it? What must have gone wrong in his childhood? I don't know; & nothing went wrong. However, when I saw it, I loved it.

Aladdin is nowhere near as good as the original, but it has just enough to make it work. Based on the 1992 film Aladdin, the film follows Aladdin (Mena Massoud), a street rat in the Arabic city of Agrabah. He & his pet monkey Abu (Frank Welker) make ends meet by stealing, but they are both kind-hearted & do it to survive.

One day, Aladdin rescues Princess Jasmine of Agrabah (Naomi Scott), who wants to explore & not be so sheltered anymore by her father the Sultan (Navid Negahban). The Sultan has actively been looking for a suitor for Jasmine, & has settled on Prince Anders of Skånland (Billy Magnussen), but Jasmine is not smitten with him.

Meanwhile, Jafar (Marwan Kenzari), the Grand Vizier, is scheming to overthrow the Sultan. In order to do so, he & his parrot sidekick Iago (Alan Tudyk) must find a magical lamp in the Cave of Wonders; however, only one who is worthy can enter it, the "diamond in the rough," who Jafar decides is Aladdin. Aladdin is forced by Jafar to help him find it, & he does, but is left behind by Jafar; however, Abu steals the lamp back & Aladdin survives. They find themselves trapped in the cave. Aladdin unwittingly rubs the lamp & summons the Genie (Will Smith), a nearly omnipotent being who has lived inside the lamp for ages. The Genie tells Aladdin that he can grant him three wishes; Aladdin uses the first to become Prince Ali of Ababwa in order to impress Jasmine, & promises to save the third wish for freeing the Genie.

Aladdin (as Prince Ali) manages to form a bond with Jasmine, while the Genie becomes smitten with Dalia (Nasim Pedrad), Jasmine's handmaiden. But as Aladdin becomes closer to Jasmine, the more he must realize who he truly is.

The cast is amazing. Mena Massoud gives a great breakout performance. Naomi Scott is also great & shows off her singing talent. But Will Smith is the standout, showing off a lot of humor & bravado, & although he isn't as great as Robin Williams was as the Genie, he definitely leaves an indelible impression on the film.

Guy Ritchie's direction is very good. Although he does have trouble handling all the plot points, Ritchie does have a lot of visual style, & his direction here is a slight improvement from where he was before.

The screenplay by Guy Ritchie & John August is good. The plot is incredibly formulaic, & the characters outside of the main 3 characters are underwritten, but the dialogue is well-done.

James Herbert's editing is mediocre. The cuts in the first half-hour are absolutely horrendous, & while it does get better from there, the bad ultimately outweighs the good.

And the music is terrific. The songs are lovingly performed, brilliantly written, & terrifically composed, making the film more enjoyable.

This is a far cry from what it could've been. There are things here that would usually make me not like a film. However, there are so many great moments here that make up for the bad moments, & push it over the line.

Aladdin was seen by me at the MJR Marketplace Digital Cinema 20 in Sterling Heights, MI on Wednesday, May 29, 2019. It is in theaters everywhere. Its runtime is 128 minutes, & it is rated PG for some action/peril.
at June 09, 2019