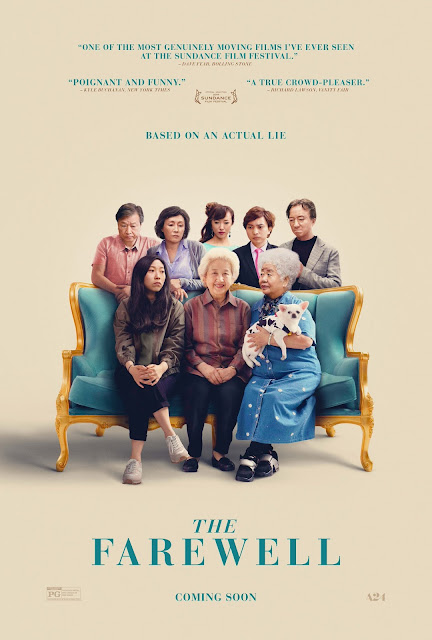 The Farewell takes a look at saying goodbye to the ones we love the most, & it's done in a dryly funny yet sincere way. Based on an actual lie, the film follows Billi (Awkwafina), a Chinese-American girl in New York. A Chinese immigrant, Billi feels more & more disconnected from the Chinese part of her culture every day, & is all but completely Americanized. Although Billi is an aspiring writer, she was just denied the Guggenheim Fellowship, a fact she keeps secret from everyone else, mainly her parents, Haiyan (Tzi Ma) & Jian (Diana Lin).

One night, Billi is told by her parents that her grandmother Nai Nai (Zhao Shuzhen) has been diagnosed with terminal lung cancer, & that she only has about 3 months left. They will be going to China to spend time with her before she dies; however, they will not tell her that she has cancer, as Chinese culture believes that it is better not to tell for the belief that it won't put the emotional burden on the ill person. In order to not make the family's arrival look suspicious, the family decides to create a wedding between Billi's cousin Hao Hao (Chen Han) & his girlfriend Aiko (Aoi Mizuhara). However, Haiyan & Jian tell Billi that it is best that she doesn't come, as they believe that she won't be able to hold up her part of the lie.

Billi travels to China anyway, since there's not much for her to do in New York as she struggles to pay rent. While in China, she reconnects with some family members she hasn't seen in a long time, including her great-aunt Little Nai Nai (Lu Hong) & her uncle Haibin (Jiang Yongbo). But the longer Billi stays in China, the more she yearns to reconnect with her roots & wants to tell the truth about what's going on.

The cast is phenomenal. Awkwafina is nowhere near her normal energetic self, but that's not an insult; in fact, this is the best performance of her young career. Tzi Ma is also terrific, making a step into the forefront from his years as an understated character actor. And Zhao Shuzhen gets in some great moments as well.

Lulu Wang's direction is excellent. Considering her work here, it's shocking to realize that this is only Wang's second feature film, as she has the visual eye & personal touch of a seasoned director.

And Lulu Wang's screenplay is amazing. Since this is a personal story for her, Wang puts her heart into the screenplay & it shows, & the focus on realistic characters & realistic dialogue is very reminiscent of the films of Mike Leigh.

This is one of the best films of the year so far. It's an often hilarious yet emotional look at a dysfunctional family.

The Farewell was seen by me at the Emagine Royal Oak in Royal Oak, MI for the 2019 Cinetopia Film Festival on Thursday, May 16, 2019. It will be released in limited release in the United States on Friday, July 12, 2019. Its runtime is 98 minutes, & it is rated PG for thematic material, brief language & some smoking.
at May 27, 2019 No comments: 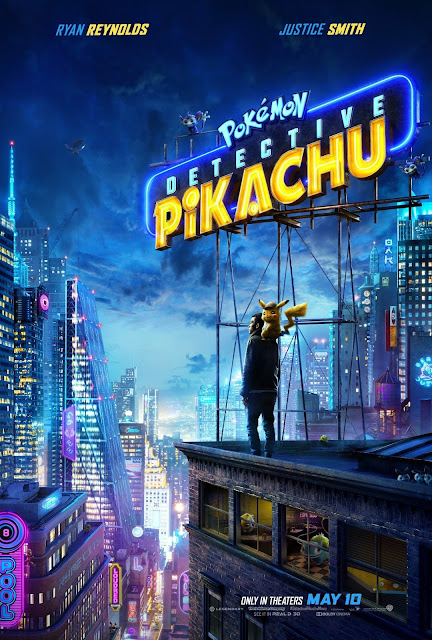 In my late elementary school & early middle school years, I absolutely loved Pokémon. I had all the movies, I watched the show (the original one), I played the games (the first 3 generations only). I wanted nothing more to become a Pokémon Master. As I've got older, I've weaned off the Pokémon fandom, but I'm still a Pokémon fan at heart.

Pokémon Detective Pikachu isn't anywhere near perfect, but it is a lot better than it should be. Based on the 2018 game Detective Pikachu, the film follows Tim Goodman (Justice Smith), a 21-year-old insurance salesman. Due to the death of his mother & being abandoned by his father Harry, Tim has given up on his childhood dream of becoming a Pokémon Master.

One day, Tim is told that by Ryme City Police Lt. Hideo Yoshida (Ken Watanabe) that Harry died in a car crash. Tim then travels to Ryme City, a city created by Howard Clifford (Bill Nighy), who sought to ensure bonds between humans & Pokémon. While there, Tim is approached by Lucy Stevens (Kathryn Newton), an aspiring journalist working for Roger Clifford (Chris Geere). Lucy is suspicious of the circumstances surrounding Harry's death.

When he returns to his father's apartment, Tim hears something strange. He then finds Detective Pikachu (Ryan Reynolds), a Pikachu wearing a deerstalker hat & a trenchcoat who is a world-class detective & can communicate only with Harry. Pikachu was Harry's police partner who has suffered from amnesia as a result of the crash Harry died in. But Pikachu does not believe Harry is dead; rather, he believes that Harry is very much alive. However, they are at a crossroads, as Pikachu cannot remember who he is or where Harry is. They must work together to rediscover Pikachu's identity & find Harry, with the help of Ms. Norman (Suki Waterhouse) & Sebastian (Omar Chaparro). But the road to finding Harry will be a tough one.

The cast is excellent. Ryan Reynolds is perfect to voice Pikachu. Justice Smith has a lot of chemistry with Reynolds. And Kathryn Newton does well with her limited screen time.

Rob Letterman's direction is great. Although Letterman has some trouble shifting between tones, he overcomes that with a warm-hearted sensibility & a keen visual eye.

The screenplay by Dan Hernandez, Benji Samit, Rob Letterman, Derek Connolly & Nicole Perlman is very good. Although the plot is very predictable & most of the supporting characters aren't well-written, the dialogue is often very humourous.

And the visual effects are astonishing. The CGI is very well-done, but the best effects come in the form of the creature design & motion capture, which is flawless.

This is, due to the lack of such films, easily the best video game film ever made. Although it doesn't reach its full potential, it still manages to be very entertaining & solidly made.

Pokémon Detective Pikachu was seen by me at the MJR Marketplace Digital Cinema 20 in Sterling Heights, MI on Friday, May 10, 2019. It is in theaters everywhere. Its runtime is 104 minutes, & it is rated PG for action/peril, some rude & suggestive humor, & thematic elements.
at May 23, 2019 No comments: 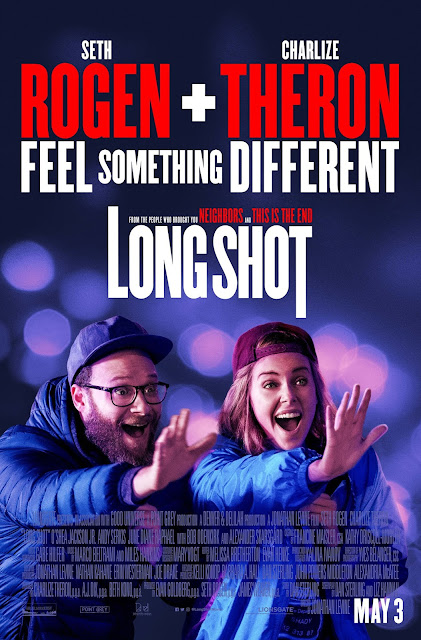 Seth Rogen films never seek to reinvent the wheel, but I love them nonetheless. I don't know what loving his style of mixing sex humor & weed humor says about me, but I'm drawn to that like a moth to a flame.

Long Shot is one of my favorite Seth Rogen comedies of this decade. The film follows Fred Flarsky (Seth Rogen), a rambunctious & aggressive but nonetheless determined news reporter for a small liberal newspaper. However, the newspaper he works for has been recently bought out by Parker Wembley (Andy Serkis), a conservative media mogul. In protest, Fred quits; unfortunately, no one else will hire him.

Discontent with his current situation, Fred turns to an old friend, Lance (O'Shea Jackson Jr.). In order to cheer him up, Lance takes Fred to a charity event that night where Boyz II Men will be performing. At the event, Fred is surprised to see that Secretary of State Charlotte Field (Charlize Theron) is there. Charlotte is one of the most popular members of the cabinet of President Chambers (Bob Odenkirk), & has been romantically linked to Canadian Prime Minister James Steward (Alexander Skarsgård). But Fred seeing Charlotte there is a blast from the past, as Fred & Charlotte once knew each other very well: Charlotte was Fred's babysitter & crush when they were in high school.

Charlotte has something big coming up: as President Chambers will not be running for reelection due to his interest in going back into acting, he is prepared to endorse her as a presidential candidate. After meeting up with Fred, Charlotte reads some of his articles & decides to hire him as her speechwriter, much to the chagrin of her head staffer Maggie (June Diane Raphael), who considers Fred to be way too outrageous.

As Fred & Charlotte begin to spend more time together, a romantic connection develops between them. But as the political spectrum grows tighter & the public becomes more receptive to Charlotte's ideas, their relationship might be over just as soon as it started.

The cast is fantastic. Seth Rogen is at his funniest since This is the End. Charlize Theron is as enigmatic as ever & is the funniest she's been since Young Adult. And O'Shea Jackson Jr. is a definite bright spot in his supporting role.

Jonathan Levine's direction is excellent. After hitting a couple bumps in the road with The Night Before & Snatched, Levine finally delivers on the promise he showed with 50/50, with his ability to keep the film on a consistently warm & hilarious tone, & some visual style.

And the screenplay by Dan Sterling & Liz Hannah is amazing. The plot feels refreshing, the characters are well-written, & the dialogue is clever & very funny.

This is the biggest surprise of the year so far. It's fueled by the cast (especially the chemistry of its two leads) & one of the funniest screenplays of the past few years.

Long Shot was seen by me at the MJR Marketplace Digital Cinema 20 in Sterling Heights, MI on Saturday, May 4, 2019. It is in theaters everywhere. Its runtime is 125 minutes, & it is rated R for strong sexual content, language throughout & some drug use.
at May 23, 2019 No comments: 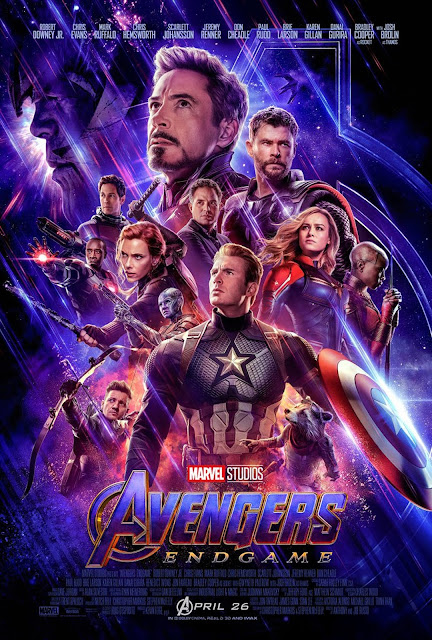 
11 years. 21 films. That's the existence length & film count of the Marvel Cinematic Universe up through April 25. In those 11 years, we have been introduced to so many characters, some of us practically growing up with them, through their rises & falls, through the good films & the bad films. But, as the old adage goes, "all good things must come to an end."

Amidst their grief, The Avengers, along with James "Rhodey" Rhodes, AKA War Machine (Don Cheadle); Scott Lang, AKA Ant-Man (Paul Rudd); Carol Danvers, AKA Captain Marvel (Brie Larson); Nebula (Karen Gillan); Rocket Raccoon (Bradley Cooper); Okoye (Danai Gurira); Wong (Benedict Wong); Harold "Happy" Hogan (Jon Favreau); & Pepper Potts (Gwyneth Paltrow), try to come up with a plan to defeat Thanos & bring back everyome that disappeared in The Decimation. They will do whatever it takes to see this succeed.

The direction by Joe & Anthony Russo is terrific. The Russo brothers perfectly balance (pun intended) comedic & dramatic tones, & also terrifically visualize the action sequences, especially the main battle, which is the best battle sequence depicted on screen since the Battle of Helm's Deep in The Lord of the Rings: The Two Towers.

The screenplay by Christopher Markus & Stephen McFeely is amazing. The narrative is very emotionally powered, the characters are well-developed, & the dialogue is very well-written.

The editing by Jeffrey Ford & Matthew Schmidt is excellent. Not only is the film cut very well, but it makes the film's immense 3-hour runtime feel brisk.

Charles Wood's production design is superb. The set design of the various locales on Earth & on other planets is completely immersive.

The makeup & hairstyling is fantastic. The makeup truly transforms the actors into truly unrecognizable characters.

The sound design is impeccable. The sounds of the action are well-created & perfectly mixed to create a loud, immersive experience.

The visual effects are incredible. The CGI is absolutely flawless, & the practical effects have also been realized to their full potential.

And Alan Silvestri's score is a masterwork. Buoyed by an orchestra, the score is able to provoke so many emotions, & is easily Silvestri's best work yet.

This is the best film of the MCU, & the best superhero film ever made. It is an emotional send-off to one of the greatest sagas in all of film history.