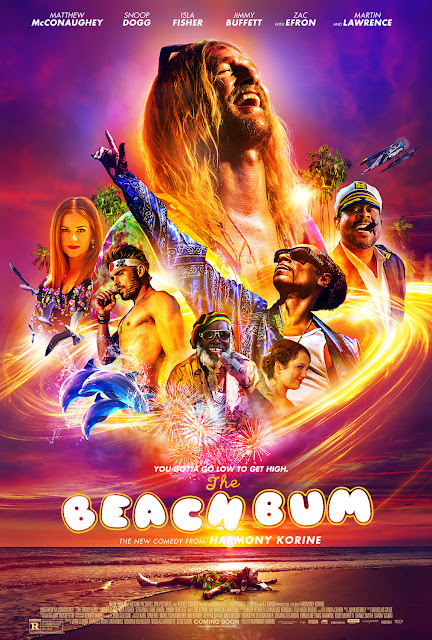 
Every single one of us is trying to live a peaceful, meditative life. We yearn to relax away the years living life on our own terms, in the long-running quest for some semblance of heaven on earth. Unfortunately, many of us never get there.

The Beach Bum expertly portrays that yearning, & in the process, becomes the closest we will ever get to reaching true nirvana. The film follows Moondog (played by Matthew McConaughey), a poet in the Florida Keys. Living for sex, weed, & booze, Moondog just spends his days engaging in hedonism while the colorful characters of the Florida Keys praise him as a legend, although, in the eyes of the general public, he is way past his prime in a literary sense. His escapades are enabled by his loving & wealthy wife Minnie (played by Isla Fisher) & his R&B-singing best friend Lingerie (played by Snoop Dogg). However, his daughter Heather (played by Stefania LaVie Owen), her fiancé Frank (played by Joshua Ritter), & Moondog's agent Lewis (played by Jonah Hill) disapprove of his behavior & their enabling. Nevertheless, Moondog still does what he wants, although he truly does love the people around him.

The death of a relative brings an inheritance for Moondog: however, half of it will go to Heather, & the other half will remain frozen until he cleans up his act & finishes the novel he has been working on for years. However, an incident sends him to rehab for a year in order to avoid prison time. In rehab, Moondog meets Flicker (played by Zac Efron), a Christian metal-loving pyromaniac. Soon after Moondog's arrival, they break out as Moondog tries to find his way back, encountering some old friends like dolphin tour captain Captain Wack (played by Martin Lawrence) & Jimmy Buffett (played by Jimmy Buffett) along the way.

The cast is superb. Matthew McConaughey is nothing short of perfect in the role that was truly made for him. He completely sells it with his enigmatic sense of being super laid-back. Snoop Dogg is phenomenal as a semi-realistic version of himself. Zac Efron is devilishly crazy. And Martin Lawrence is hilarious in his return to the silver screen.

Harmony Korine's direction is terrific. Korine perfectly captures the hedonism at play in the Florida Keys with a style that is all his own, & that style is in top form here.

Harmony Korine's screenplay is brilliant. The plot is lovingly weird & enveloping, the characters are the most idiosyncratic characters in film this decade & are so well-developed, & the dialogue is masterfully written.

Benoît Debie's cinematography is gorgeous. Debie drapes the Florida Keys with the hot sun as it sits in the daytime sky & goes down to the beautiful sunsets, & marvelously captures the nightlife with the neon lights.

And the soundtrack is one of the best ever curated for a film. This soundtrack perfectly fits my musical taste so well that I think the soundtrack producers looked at my Apple Music search history. Filled with 1970s yacht rock hits such as Gordon Lightfoot's Sundown, Gerry Rafferty's Right Down the Line, & Jimmy Buffett's A Pirate Looks at Forty, the soundtrack transports you to a place of epic tranquility. The only things that could've made this soundtrack even better would be if they used Tommy James & the Shondells' Crimson & Clover (which was used in the trailer), Chuck Mangione's Feels So Good, Little River Band's Cool Change, & Jefferson Starship's Miracles. But if it's not broke, don't fix it, & it's certainly not broke here, so I must give the soundtrack every inch of praise I can give.

This is the best film of the year so far, & quite possibly the best comedy of the decade. It is a peaceful yet rambunctious comedy that I hope becomes a cult classic very soon in the vein of The Big Lebowski.

The Beach Bum was seen by me at the MJR Marketplace Digital Cinema 20 in Sterling Heights, MI on Saturday, March 30, 2019. It is currently in 2 theaters in the Detroit area: the AMC Forum 30 in Sterling Heights, MI; & the AMC Star Great Lakes 25 in Auburn Hills, MI. Its runtime is 95 minutes, & it is rated R for pervasive drug & alcohol use, language throughout, nudity & some strong sexual content.
at April 15, 2019