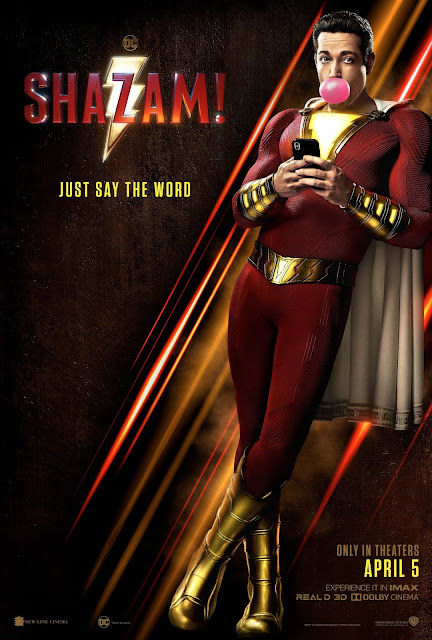 I'll say it again: the DC Extended Universe (DCEU) is a mess. 4 of its first 5 films were poor to awful, the only good one being Wonder Woman, which is merely good. However, it has shown signs of improvement, as evidenced by Wonder Woman & Aquaman, but there is still a long way to go before it can have the same track record as the Marvel Cinematic Universe (MCU).

Shazam!, despite having a couple flaws, is a very promising step in the right direction for the DCEU. The film follows Billy Batson (played by Asher Angel), a foster kid in Philadelphia. Having run from several foster homes in search of his mother Marilyn (played by Caroline Palmer), Billy has a knack for getting into trouble. As a last chance, Billy is placed in a foster home run by Rosa (played by Marta Milans) & Victor (played by Cooper Andrews) Vasquez, who have 5 other foster children: Freddy Freeman (played by Jack Dylan Grazer); Mary Bromfield (played by Grace Fulton); Darla Dudley (played by Faithe Herman); Eugene Choi (played by Ian Chen); & Pedro Peña (played by Jovan Armand). He rooms with Freddy, who is obsessed with superheroes.

One day, Billy fights off some people bullying Freddy & runs from them onto the subway, but something strange happens on the subway ride: he is suddenly transported into an underground world where Shazam The Wizard (played by Djimon Hounsou) appears. Shazam has chosen Billy to be his new champion to protect the world from the Seven Deadly Sins. By touching Shazam's staff & saying his name, Billy becomes Shazam (played by Zachary Levi), an adult superhero who can change between his younger & older selves by saying "Shazam!" Billy, not knowing anything about superheroes, asks Freddy to mentor him in becoming a superhero. This leads to the discovery of his powers: electricity manipulation, super strength, super durability, super speed, supreme knowledge & flight.

As Billy learns of all his powers & tries to master them, he becomes a viral sensation. But this attracts Dr. Thaddeus Sivana (played by Mark Strong), who has a long-held vendetta against Shazam The Wizard for considering him as a champion then not picking him. Sivana has the Eye of the Rock, which allows him to unleash the Seven Deadly Sins. Now Billy must learn how to use his powers, defeat Dr. Sivana, & find his birth mom all at once.

The cast is spectacular. Zachary Levi is perfect as adult Billy Batson, & so is Asher Angel as young Billy Batson. Jack Dylan Grazer is terrific. And the chemistry between Angel & Grazer (& Levi & Grazer) is just incredible.

David F. Sandberg's direction is great. Although Sandberg lets a few things go on longer than they should, he is able to perfectly balance tonal shifts.

The screenplay by Henry Gayden & Darren Lemke is amazing. The plot is always intriguing, the characters are well-developed, & the dialogue is excellent (& very funny).

This is a very good superhero film. Although it has a couple small flaws, it's a genuinely funny & heartwarming addition to the DCEU, & one that paves a new way for it.

Shazam! was seen by me at an advance screening at the AMC Forum 30 in Sterling Heights, MI on Saturday, March 23, 2019. It is now in theaters everywhere. Its runtime is 132 minutes, & it is rated PG-13 for intense sequences of action, language, & suggestive material.
at April 11, 2019