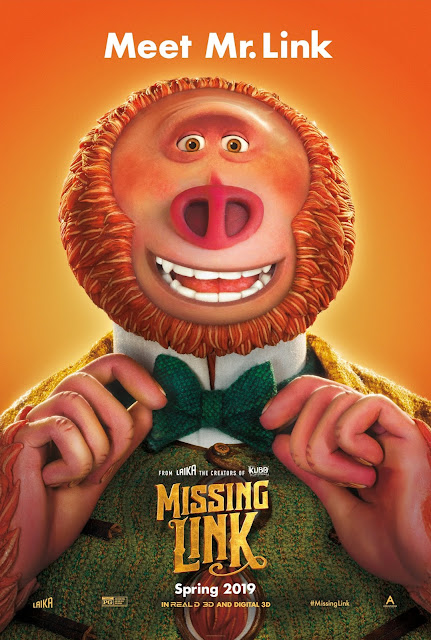 Stop-motion animation is such a wonderful style of animation. The work that goes into it is so intricate & wondrous. Unfortunately, people do not go to see films like these, as they are more interested in the CGI-animated films that are commonplace these days.

Missing Link, while just short of perfect, is a great work of stop-motion animation. The film follows Sir Lionel Frost (voiced by Hugh Jackman), an explorer of mythical creatures. Despite his best efforts, Frost has consistently failed at trying to discover these creatures, & his assistant Lemuel Lint (voiced by David Walliams) has recently resigned. However, he remains determined to discover mythical creatures & join a society of great explorers led by Lord Piggot-Dunceby (voiced by Stephen Fry).

One day, Frost receives a letter telling of a sighting of a Sasquatch in the Pacific Northwest. Believing that this is true, Frost makes a deal with Piggot-Dunceby that if he finds the Sasquatch, he will be accepted into the society, to which Piggot-Dunceby begrudgingly agrees. However, Piggot-Dunceby does not want Frost in the society, nor does his right-hand man Mr. Collick (voiced by Matt Lucas), so he hires bounty hunter Willard Stenk (voiced by Timothy Olyphant) to stop Frost from succeeding in his attempt.

When he arrives in the Pacific Northwest, Frost discovers the Sasquatch (voiced by Zach Galifianakis), whom Frost names Mr. Link (& eventually Susan). Susan tells Frost that he wrote the letter, & wants Frost to help him find his Yeti relatives in the Himalayas, led by the Yeti Elder (voiced by Emma Thompson). Frost agrees to help Susan find his relatives.

Meanwhile, Adelina Fortnight (voiced by Zoë Saldana), Frost's ex-girlfriend, has a map to the Himalayas that her late husband had. Frost & Susan break into her house to find it, & although they get it, Fortnight catches onto them the next day. However, she allows them to use the map as long as she joins them. Together, they will make their way to the Himalayas, where mountain guide Ama Lahuma (voiced by Amrita Acharia) will help them get to the Yetis. But Stenk is right on their tail, & this will be a complicated journey for all of them.

The voice cast is excellent. Hugh Jackman shows off his great comedic timing. Zach Galifianakis is at his funniest in years. And the rest of the cast, especially Timothy Olyphant, give great performances in their supporting voice roles.

Chris Butler's direction is great. Although a couple moments have issues maintaining interest, Butler is able to overcome that with a colorful animated style & a warm tone throughout.

Chris Butler's screenplay is amazing. The plot is intriguing, the characters are well-developed, & the dialogue is consistently funny.

And the animation is terrific. The work that was put in to making this film is so evident here, as the attention to detail is awe-inspiring.

This is a very good stop-motion film. Although there are a couple small issues, they're definitely overcome by the voice cast, writing & animation.

Missing Link was seen by me at the MJR Marketplace Digital Cinema 20 in Sterling Heights, MI on Saturday, April 13, 2019. It is in theaters everywhere. Its runtime is 94 minutes, & it is rated PG for action/peril & some mild rude humor.
at April 21, 2019