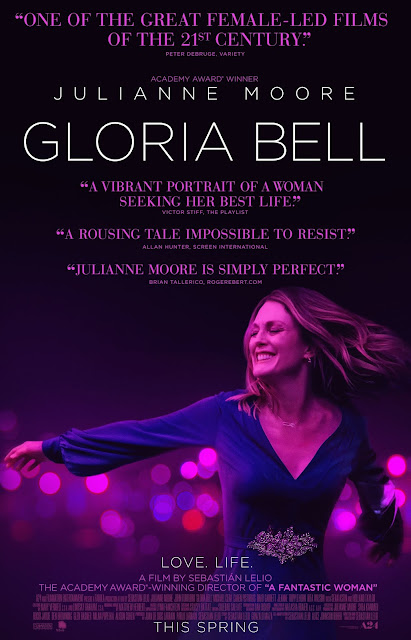 
I wish there were more leading roles for women over 50 in cinema. There's a lot of roles for them, but they're always pushed to the side. Thankfully, we have seen some truly great leading roles for older actresses, but there is still much work to be done.

Gloria Bell, although uneven, is a solid film that provides a great leading role for an older actress. Based on the 2013 film Gloria by Sebastián Lelio, the film follows Gloria Bell (played by Julianne Moore), a middle-aged woman in Los Angeles. More or less ignored by her daughter Anne (played by Caren Pistorius) & son Peter (played by Michael Cera), & long-divorced from her husband Dustin (played by Brad Garrett), who is now happily married to Fiona (played by Jeanne Tripplehorn), Gloria finds herself either at her job, alone with her cat, with her best friend Vicky (played by Rita Wilson), encountering people like Jeremy (played by Sean Astin), visiting her mother Hillary (played by Holland Taylor), or dancing at a nightclub populated by those in her age group, playing music from their teenage years.

One night, while at the nightclub, Gloria meets Arnold (played by John Turturro), an ex-Marine. They strike it up almost immediately. But she soon finds out that Arnold isn't really that all figured out as a person: he recently lost 100 pounds, is socially awkward, & bends over backwards for his whiny ex-wife & their two whinier daughters, who pester him with demands at every waking hour, to which he (more or less) begrudgingly accepts. Gloria must figure out how to get out of this sticky situation & still find her best self.

The cast is terrific. Julianne Moore, at 58, looks as vibrant as ever, & gives a spellbindingly natural performance. John Turturro is definitely someone you love to hate here. And it's always great to see Brad Garrett, who does wonders in his limited screen time.

Sebastián Lelio's direction is great. Although his style is an acquired taste for some, & is a bit alienating at times, Lelio appeals to us with a warm, engaging tone.

The screenplay by Alice Johnson Boher, Sebastián Lelio & Gonzalo Maza is very good. Although the plot is a bit formulaic, & some of the characters feel underdeveloped, the dialogue is very well-written, & often very humorous.

And the music is superb. Matthew Herbert's ambient score helps underscore the warm feeling of the film. And the soundtrack, featuring songs by Earth, Wind & Fire, Bonnie Tyler, & Laura Branigan, is a perfect throwback to the 1970s & 1980s.

This is a solid little film. Although it is a bit unfocused & underdeveloped at times, it's still an engaging dramedy featuring a fantastic performance from one of our finest actresses.

Gloria Bell was seen by me at the MJR Troy Grand Digital Cinema 16 in Troy, MI on Saturday, March 23, 2019. It is currently in 8 theaters in the Detroit area, including the Landmark Main Art Theatre in Royal Oak, MI; the AMC Star Fairlane 21 in Dearborn, MI; the AMC Star Great Lakes 25 in Auburn Hills, MI; & the Michigan Theater in Ann Arbor, MI. Its runtime is 102 minutes, & it is rated R for sexuality, nudity, language & some drug use.
at April 11, 2019