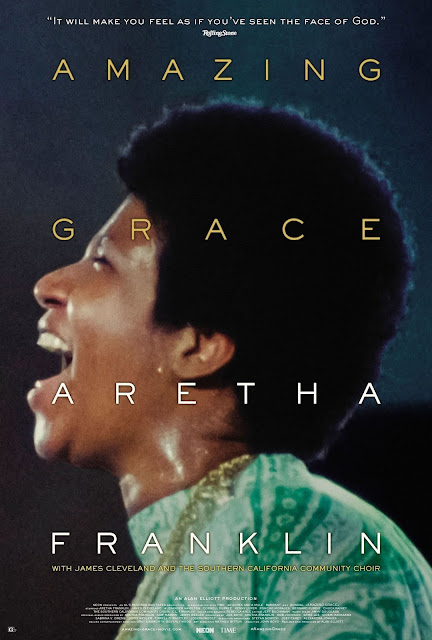 
Aretha Franklin was truly one of the greatest singers of all time, & she definitely earned her title of "The Queen of Soul." With 38 studio albums, 8 live albums, 1 soundtrack album, & hundreds of hit singles such as Respect, Chain of Fools, You Make Me Feel (Like a Natural Woman), I Say a Little Prayer, & Think, Franklin became the most charted female artist in history, leaving an indelible legacy.

Amazing Grace is a soul-shattering documentary of the recording of one of her finest albums. The film follows Aretha Franklin as she arrives to the New Temple Missionary Baptist Church in Los Angeles in 1972 to record her upcoming live gospel album, Amazing Grace. Franklin has assembled her usual crew for the album: Cornell Dupree on guitar, Pancho Morales on congas & percussion, Bernard Purdie on drums, & Chuck Rainey on bass, along with Arif Mardin & Jerry Wexler producing. Also, Franklin will be accompanied by Rev. James Cleveland & the Southern California Community Choir.

The church is packed with people in the audience, & they are welcomed to participate in the recording with words of praise. As the recording commences, the music is awe-inspiring. Little does the audience know how successful this album will be, as it will become Franklin's best-selling album & the best-selling live gospel album of all time.

The direction by Sydney Pollack & Alan Elliott is astounding. Pollack, who sadly never got to see the release of the film, as he passed in 2008, perfectly visualizes the soul-shaking music & the love & effort put into it. However, Pollack did not use a clapperboard to sync the picture & sound together, which caused the film to be left in the vaults for 38 years. Elliott came in to finish the job & put it all together. His realization is the cherry on top of this film, for we would not be seeing this film without his restoration work.

This is a truly awe-inspiring documentary. It is a true crowd-pleaser, as it makes you want to get up & sing with The Queen of Soul herself.

Amazing Grace was seen by me at the AMC Star John R 15 in Madison Heights, MI on Thursday, April 18, 2019. It is currently in 6 theaters in the Detroit area, including the Landmark Main Art Theatre in Royal Oak, MI; The Maple Theater in Bloomfield Township, MI; & the Michigan Theater in Ann Arbor, MI. Its runtime is 89 minutes, & it is rated G.
at April 23, 2019