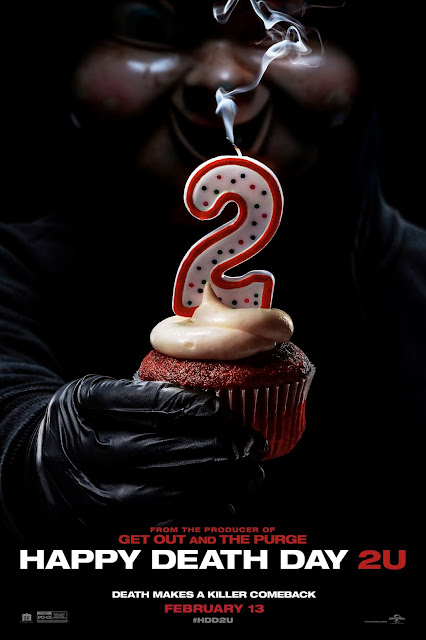 
2017's Happy Death Day was a huge surprise. It became a sleeper hit & was positively received. Even though it wasn't something I considered myself to be intrigued by, I immediately fell in love with it & its darkly humorous style.

Happy Death Day 2U is one of those rare sequels that improves on the first. The film continues the story of Theresa "Tree" Gelbman (played by Jessica Rothe), now in a relationship with Carter Davis (played by Israel Broussard). On Tuesday, September 19, Carter's friend Ryan Phan (played by Phi Vu) goes to work with Samar Ghosh (played by Suraj Sharma) & Dre Morgan (played by Sarah Yarkin) on a quantum reactor; however, Dean Bronson (played by Steve Zissis) shuts down the reactor, as it has caused several power outages. Later that night, Ryan is murdered by an unknown person.

The next morning, Tree wakes up on Monday, September 18, but everything is different: Lori was not the one that killed her in the old time loop, & Carter is now dating Danielle Bouseman (played by Rachel Matthews), who is now less stuck up. Tree has now shifted into another dimension. At first, she wants to go back, but a surprising developments causes her to have a change of heart. This will prove to be a fateful course of events.

The cast is phenomenal. Jessica Rothe has so much energy & range & I'd love to see her in more roles. The rest of the cast does a terrific job, but this film belongs to Rothe.

Christopher Landon's direction is excellent. Landon is able to perfectly balance the humor & the horror, & also throws in a bit of well-timed emotional moments for good measure.

And Christopher Landon's screenplay is amazing. The plot feels fresh & is able to poke fun at itself, the characters are fleshed out, & the dialogue is super witty.

This is another big surprise. It has everything I wanted in a sequel to Happy Death Day, & I had an immensely fun time. And ultimately, is it a bad thing? Definitely not.

Happy Death Day 2U was seen by me at the MJR Marketplace Digital Cinema 20 in Sterling Heights, MI on Saturday, February 16, 2019. It is in theaters everywhere. Its runtime is 100 minutes, & it is rated PG-13 for violence, language, sexual material & thematic elements.
at March 04, 2019