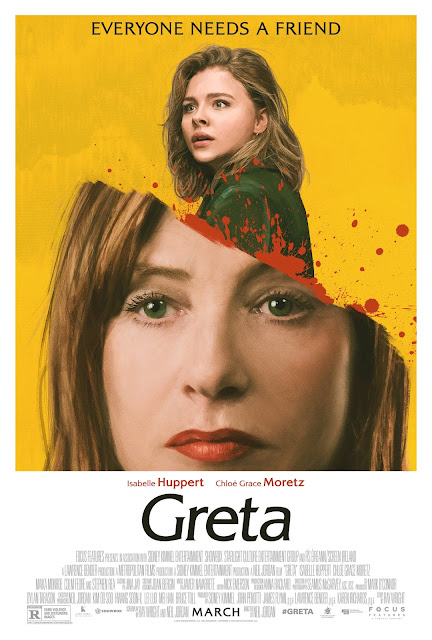 
Films about stalking have been atrocious over the past few years. The Boy Next Door, Unforgettable, Obsessed: all of these films have dealt with stalkers, yet have been so formulaic that they're impossible to admire.

Greta, while uneven, is a solid psychological thriller about stalkers. The film follows Frances McCullen (played by Chloë Grace Moretz), a waitress in New York. Frances lives in an apartment with her friend Erica Penn (played by Maika Monroe). Since the death of her mother, Frances has maintained a very strained relationship with her father Chris (played by Colm Feore), who has become married to his job.

One day, while riding the subway, Frances comes across a handbag. She tries to give it to the lost & found, but is unable to. She looks & sees to whom the handbag belongs, & finds that it belongs to Greta Hideg (played by Isabelle Huppert), a French piano teacher who is widowed with a daughter  studying in France. Frances goes over to Greta's house to return the handbag, & as a reward, is brought inside for coffee. They talk, & eventually strike a strong friendship, much to the chagrin of Erica, who believes that Frances is out of her mind for doing almost everything with someone whom she just met.

One night, while helping with dinner at Greta's house, Frances goes to look for candles in the cabinet. However, instead of candles, Frances discovers more handbags that are exactly like the one she found on the subway, all of them having names of women on them. Disgusted by this, Frances vows to never see or speak to Greta again. But this will prove to be extremely difficult as Greta will incessantly stalk Frances for a long time. And the more that public investigator Brian Cody (played by Stephen Rea) finds about Greta, the more Frances realizes that Greta is definitely not as she appears.

The cast is amazing. Chloë Grace Moretz shows so much fear & terror in her performance. Isabelle Huppert is devilishly terrific. The rest of the cast does a phenomenal job, but this belongs to Moretz & Huppert.

Neil Jordan's direction is great. Although Jordan sometimes struggles with whether or not to play it campy or dark, Jordan has enough visual style to make it work.

And the screenplay by Ray Wright & Neil Jordan is very good. Although the plot is formulaic at times & some characters are two-dimensional, the dialogue is very well-written.

This is a solid psychological horror film. Although it does have several flaws, it has enough in the tank to make it worthwhile.

Greta was seen by me at the MJR Marketplace Digital Cinema 20 in Sterling Heights, MI on Friday, March 1, 2019. It is in theaters everywhere. Its runtime is 98 minutes, & it is rated R for some violence & disturbing images.
at March 07, 2019