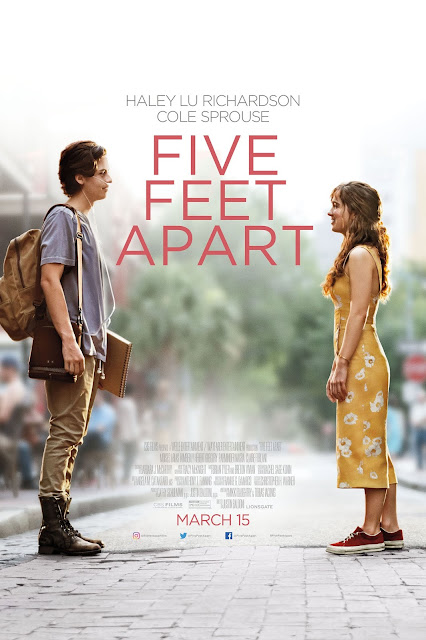 Young love stricken by terminal illness. We've seen this film more times than we count. Love Story, A Walk to Remember, The Fault in Our Stars, & countless other films have all tackled this subject, to varying results: some being good to great, while others vary from mediocre to flat-out awful. Nonetheless, there's been too many of them that there are really no original ways to go from this genre.

Five Feet Apart tries to go somewhere new, but ends up falling into the same old pitfalls as it goes on. The film follows Stella Grant (played by Haley Lu Richardson), a teenage girl with cystic fibrosis, a genetic disorder that causes buildup of mucus in the lungs. As a result, Stella has spent a lot of her life in the hospital. However, she tries to live as normal of a life as possible. She has a YouTube channel dedicated to coping with her illness & helping others with cystic fibrosis cope as well. Also by her side are her best friend Poe (played by Moisés Arias), a fellow cystic fibrosis patient, & Barbara (played by Kimberly Hébert Gregory), the nurse overseeing the cystic fibrosis ward, along with Dr. Hamid (played by Parminder Nagra).

One day, Stella notices someone new at the hospital. He is Will Newman (played by Cole Sprouse), a fellow cystic fibrosis patient. Will has come to the hospital for a medication trial to get rid of his Burkholderia cepacia infection. In order to stop potentially deadly cross-infection from occurring, cystic fibrosis patients are strictly kept at least 6 feet apart at all times. Will, who is more of a risk taker, likes to break this rule, much to Stella's chagrin.

Stella initially dislikes Will due to his penchant for breaking rules. However, they decide to help each other out: Stella will let Will draw her if Will follows through with his medication regimen. They both agree to this, & eventually, Stella & Will take a liking to each other. They eventually decide to take something back from cystic fibrosis: one foot from the six-foot rule. But as Stella could potentially get new lungs, their romance could be in danger.

The cast is solid. Haley Lu Richardson is phenomenal, as she is completely believable in the role & is able to elicit various emotions with a simple change in her voice or her facial expression. Moisés Arias & Kimberly Hébert Gregory do very well in their supporting roles. However, Cole Sprouse cannot act to save his life, as he is unable to show any other expression than being a tedious, pretentious, & moody teenager. His performance ultimately brings the film down.

Justin Baldoni's direction is mediocre. Although Baldoni shows some promise when it comes to eliciting good performances out of his actors, his visual style feels very bland.

And the screenplay by Mikki Daughtry & Tobias Iaconis is poor. While the plot does treat cystic fibrosis very well, it falls into the same third-act potholes that plagues films like these, & the dialogue is frequently saccharine.

This is a disappointment. Although it had the potential to be better than most sick teen romance films, it ultimately becomes just another one of those films that didn't try hard enough.

Five Feet Apart was seen by me at the MJR Marketplace Digital Cinema 20 in Sterling Heights, MI on Saturday, March 16, 2019. It is in theaters everywhere. Its runtime is 116 minutes, & it is rated PG-13 for thematic elements, language & suggestive material.
at March 26, 2019