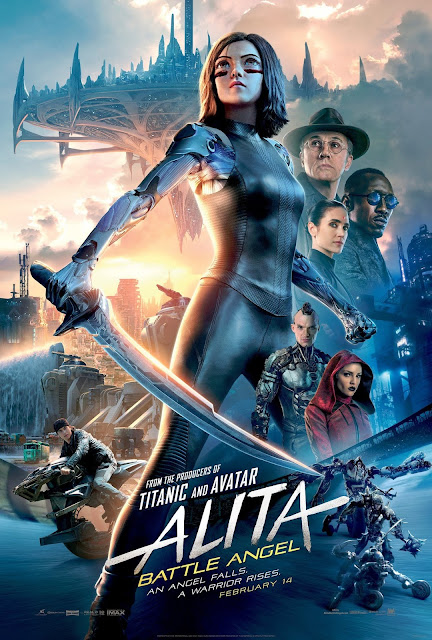 
I've always found it to be a challenge to get into cyberpunk sci-fi films. I've never been the biggest sci-fi person in general, but these films don't look to have as strong of a story as they do strong visuals.

Alita: Battle Angel, while a bit lacking, is a visually wondrous cyberpunk sci-fi film. Based on the manga series Battle Angel Alita by Yukito Kishiro, & set in 2563, the film follows Alita (played by Rosa Salazar), a female cyborg in Iron City. Iron City, along with the rest of Earth, has been ravaged by The Fall several years prior. Alita was discovered & assembled by scientist Dr. Dyson Ido (played by Christoph Waltz) & named Alita for the deceased daughter of him & his ex-wife Dr. Chiren (played by Jennifer Connolly). Although Alita did have a brain when she was discovered, she has no recollection of her past.

One day, Alita meets Hugo (played by Keean Johnson), a junk dealer with whom she is smitten. Hugo introduces Alita to Motorball, a cyborg fight to the death, all the while dreaming of moving to Zalem, the wealthy sky city.

One night, Alita discovers that Ido is a Hunter-Warrior when he encounters 3 cyborg assassins, including Grewishka (played by Jackie Earle Haley). Alita helps kill 2 of the 3 cyborgs, but Grewishka escapes. Much to the chagrin of Ido, Alita decides to become a Hunter-Warrior & asks other Hunter-Warriors to help her fight Grewishka, but they refuse, as he is not on the official wanted list.

In order to get Hugo to Zalem, Alita enlists in Motorball, but realizes that the other cyborgs are Hunter-Warriors hired by entrepreneur Vector (played by Mahershala Ali) to kill her at all costs. Also, Hugo is hunted by Hunter-Warrior Zapan (played by Ed Skrein). Alita must protect herself & the people she cares about while finding out more about herself in the process.

The cast is amazing. Rosa Salazar has the perfect combo of charm & stubbornness for the role. Christoph Waltz is excellent. Mahershala Ali is terrific. And the rest of the cast turn in superb supporting roles.

Robert Rodriguez's direction is great. Although he does have some issues with elevating the story, Rodriguez does bring a lot of ambition to the table, especially in the action sequences.

The screenplay by James Cameron & Laeta Kalogridis is very good. The plot is a bit formulaic & some of the characters aren't well-developed, but the dialogue is well-written.

And the visual effects are stunning. The CGI landscape of the world is incredibly realized, & the CGI for Alita looks terrific.

This is a good sci-fi flick. Although it does have some struggles, it manages to move past them to make this an entertaining ride.

Alita: Battle Angel was seen by me at the MJR Marketplace Digital Cinema 20 in Sterling Heights, MI on Monday, February 18, 2019. It is in theaters everywhere. Its runtime is 122 minutes, & it is rated PG-13 for sequences of sci-fi violence & action, & for some language.
at March 06, 2019