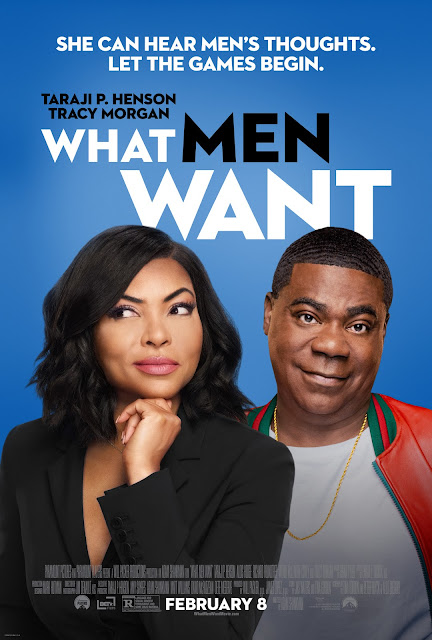 
Lately, there has been a large number of reboots of previously successful films with women replacing men as the lead characters. This has received scorn from many who consider this to be an "SJW attack" on their favorite films. I disagree. While I would like to see more original films made with female leads, I am glad to see more diversity in lead roles.

What Men Want isn't perfect, but it's a solidly-made (& very outrageous) comedy. Based on the 2000 film What Women Want, the film follows Alison "Ali" Davis (played by Taraji P. Henson), a successful sports agent in Atlanta. Raised by her single father/boxer, Skip (played by Richard Roundtree), Ali has been very determined for years. However, Ali is overshadowed by the men at the agency.

When Ali is passed over for a major position at the agency, she ends up being with her friends: Olivia (played by Wendi McLendon-Covey); Mari (played by Tamala Jones); & Ciarra (played by Phoebe Robinson). They end up meeting with Sister (played by Erykah Badu), a psychic who gives her jasmine tea laced with marijuana, peyote & crack. After this, the friends go out to the club, & Ali ends up hitting her head.

The next day is when things start to change: Ali can now hear men's thoughts. After being shocked by this revelation, Ali's assistant Brandon (played by Josh Brener) tells her that she can use this to her advantage. She does this by pushing to get potential #1 NBA draft pick Jamal Barry (played by Shane Paul McGhie) to sign with her. However, this proves to be complicated, mainly due to his money-obsessed father Joe "Dolla" Barry (played by Tracy Morgan), who insists on hiring someone who is a family person. This causes Ali to get Will (played by Aldis Hodge) sucked into the charade. But Ali ends up falling in love with Will, & this could throw everything for a tailspin.

The cast is amazing. Taraji P. Henson has never been more hilarious. Tracy Morgan is perfect as a fictionalized Lavar Ball. And Erykah Badu is an absolute scene-stealer.

Adam Shankman's direction is great. Although he does drag some stuff out a bit, Shankman always keeps the tone light but raunchy.

And the screenplay by Tina Gordon, Alex Gregory, Peter Huyck & Jas Waters is very good. Although the plot is predictable & the characters are a bit thinly written, the dialogue is always hilarious.

This is a good comedy. Although it does hit many of the familiar tropes, it has enough in it to distinguish itself from other mainstream comedies.

What Men Want was seen by me at the MJR Marketplace Digital Cinema 20 in Sterling Heights, MI on Friday, February 8, 2019. It is in theaters everywhere. Its runtime is 117 minutes, & it is rated R for language & sexual content throughout, & some drug material.
at February 22, 2019