The Lego Movie 2: The Second Part 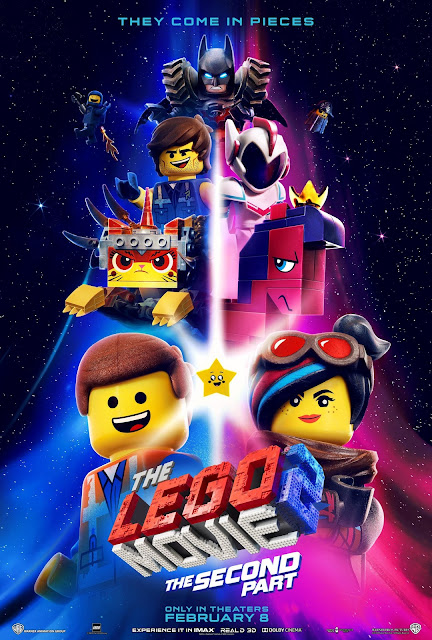 
The Lego Movie was not only the best animated film of 2014, but one of the best films of 2014. It was fresh, lively, well-made, & funny. Although I was saddened that it wasn't even nominated for the Oscar for Best Animated Feature, I knew that it held a special place in the hearts of many who saw the film.

The Lego Movie 2: The Second Part is just as great as the first. The film continues with the story of Emmet Brickowski (voiced by Chris Pratt), a Master Builder who still believes everything is awesome in Bricksburg, formed by the human child Finn (played by Jadon Sand). But unfortunately, everything is not awesome: 5 years ago, Duplo invaders formed by the human child & sister of Finn, Bianca (played by Brooklynn Prince) came to Bricksburg, changing it into Apocalypseburg, a Mad Max-type city, turning everyone into hardened individuals. Emmet remains upbeat, but is plagued by vivid nightmares of "Armamageddon."

One day, Duplo Army General Sweet Mayhem (voiced by Stephanie Beatriz) comes to Apocalypseburg, stating that Queen Watevra Wa'Nabi (voiced by Tiffany Haddish) of the Systar System wants to marry their leader. After debating over who the leader is, Mayhem kidnaps Lucy (voiced by Elizabeth Banks), Bruce Wayne, AKA Batman (voiced by Will Arnett), Benny (voiced by Charlie Day), Princess Unikitty (voiced by Alison Brie), & Metalbeard (voiced by Nick Offerman). Batman becomes smitten with Wa'Nabi, while the others are placed in environments they love, which all but Lucy enjoy.

Emmet sets after them, & on the way to the Systar System, is saved from an asteroid by Rex Dangervest (voiced by Chris Pratt), who resembles Emmet but is more strong & cool than Emmet. Together, they try to save Emmet's friends, but this may prove to be very difficult, as the human person Mom (played by Maya Rudolph) may stop her human children, Finn & Bianca.

The voice cast is fantastic. Chris Pratt is so fun & likeable here. Will Arnett is awesome. Stephanie Beatriz is terrific. Tiffany Haddish is superb. And the rest of the voice cast is amazing.

The screenplay by Phil Lord, Christopher Miller & Matthew Fogel is brilliant. The plot is intriguing, the characters are lovingly weird, & the dialogue is very funny.

And the animation is wondrous. The work it takes to make Lego characters so lively & animate is a monumental effort & to see it done perfectly is just awe-inspiring.

This is a spectacular sequel. It has everything we loved about the first & doubles down on it, making this a wonderful experience.