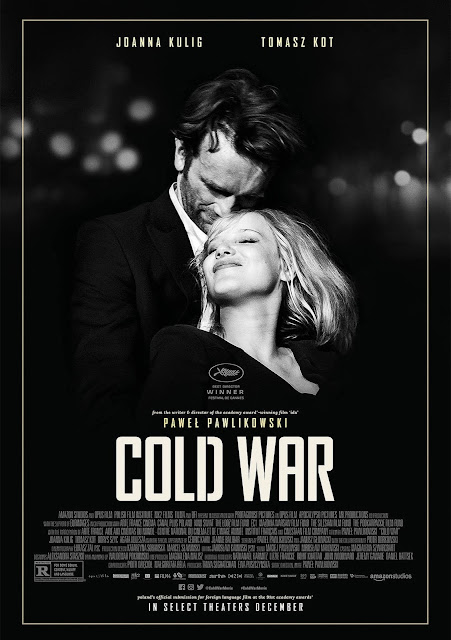 
I'm half-Polish. My entire maternal side of the family is 100% Polish. However, I have never seen a single Polish film. I haven't seen any films by who are considered to be the best Polish filmmakers: Roman Polanski, Krzysztof Kieślowski, Agnieszka Holland, & Andrzej Wajda. In the future, I plan to rectify this.

Cold War is a phenomenal film with such immense beauty. Set between 1949 & 1964 in Poland & France, the film follows Zuzanna "Zula" Lichoń (played by Joanna Kulig), a young singer from a major city in Poland, but pretending to be a girl from the mountains. Haunted by an incident in her past, Zula goes to audition for Mazurek, a Polish folk group focused on bringing the music of the Polish working class to the world, led by Lech Kaczmarek (played by Borys Szyc), who has housed the audition in a welcoming villa.

At the audition, Zula meets Wiktor (played by Tomasz Kot), a jazz musician scouting for Mazurek. Although Wiktor is in a relationship with Irena (played by Agata Kulesza), he is immediately smitten with Zula. They eventually start a relationship, albeit a very rocky one, bound by music, but broken by the eventual transformation of Mazurek into another small cog in the Soviet propagandist machine.

Their love brings them together & tears them apart through Warsaw, Berlin & Paris, through freedom & tyranny. But they always try their hardest to make their love work, even if that decision could be very costly.

The cast is phenomenal. Joanna Kulig is a revelation. Her acting talent is phenomenal, but it is closely matched by her beautiful voice. Tomasz Kot is also phenomenal, always exuding so much charm at every moment. And their chemistry is just so intense.

Paweł Pawlikowski's direction is superb. For what seems to be a quiet romance, Pawlikowski brings so much liveliness to the film & explores so much in such a small runtime.

The screenplay by Paweł Pawlikowski, Janusz Głowacki & Piotr Borkowski is amazing. The plot never loses steam, the narrative is brief yet glorious, & the dialogue is terrific.

And Łukasz Żal's cinematography is gorgeous. Żal beautifully films the scenery with a monochrome Academy-style ratio, & the lighting is wondrous.

This is a true masterpiece. This is one of the best romances in recent memory. It's a vivacious film from start to finish.