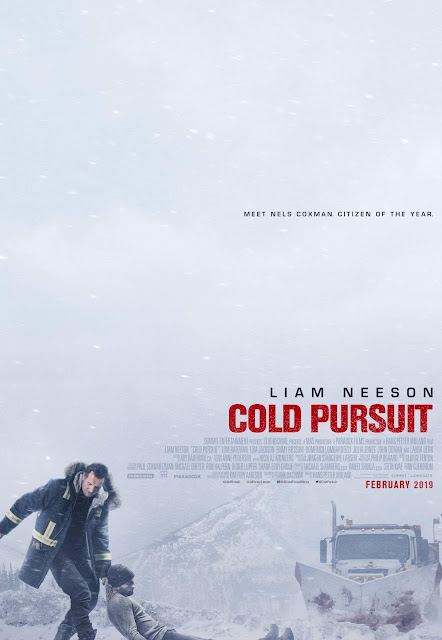 Ok, maybe that isn't the correct quote, but you get the gist of it: revenge is best when it's cold-blooded. Although I'm not the type of person who would actively go out seeking vengeance, I know that's the best way to go about it.

Cold Pursuit, while flawed, is a good & quirky revenge thriller. Based on the 2014 film In Order of Disappearance, the film follows Nelson "Nels" Coxman (played by Liam Neeson), a snowplow driver in the small resort town of Kehoe, Colorado, about a few hours away from Denver. He lives a quiet life with his wife Grace (played by Laura Dern) & son Kyle (played by Micheál Richardson).

One night Nels receives an award for Citizen of the Year from the Kehoe town council. That same night, Kyle is kidnapped while working at the Kehoe airport & killed by a forced heroin overdose. Grace ends up leaving Nels due to her grief, leaving Nels despondent in his grief & on the brink of suicide.

Before Nels could act on his thoughts, he discovers that Kyle wasn't murdered in any random way: he was murdered by a Denver drug cartel. After learning more about the cartel from his brother Brock, AKA Wingman (played by William Forsythe), Nels goes from a quiet man to a cold-blooded killer out for revenge. He kills 3 men from the drug cartel in a short time span. The drug cartel boss, Trevor "Viking" Calcote (played by Tom Bateman), who is in a custody battle with his ex-wife Aya (played by Julia Jones), believes this to be a retaliation from a Native American drug cartel led by White Bull (played by Tom Jackson).

Meanwhile, new detective Kim Dash (played by Emmy Rossum) is thoroughly intrigued by the drug cartel murders, while her partner Gip (played by John Doman) is less enthused. Also, Viking's enforcer Mustang (played by Domenick Lombardozzi) is in a relationship with White Bull's enforcer Dexter (played by Benjamin Hollingsworth). As Nels finds himself entangled in all of this, he realizes his path of revenge might be more convoluted than he once thought.

The cast is fantastic. Liam Neeson does some of his best work in years. Tom Bateman is terrific. Tom Jackson is menacing. And Emmy Rossum is superb.

Hans Petter Moland's direction is great. Although Moland has some issues with tonal shifts, he is able to overcome that by successfully adapting his style (for a remake of his own film) for American audiences.

And Frank Baldwin's screenplay is very good. Although the plot is fairly predictable & the characters outside of the main few are not fleshed out well (especially Laura Dern's character), the dialogue is spectacular, as it always filled with excellently bleak dark humor.

This is a good dark comedy. Although it does have its fair share of issues, the performances & dark humor are there to pick the film up.

Cold Pursuit was seen by me at the MJR Marketplace Digital Cinema 20 in Sterling Heights, MI on Friday, February 15, 2019. It is in theaters everywhere. Its runtime is 119 minutes, & it is rated R for strong violence, drug material, & some language including sexual references.
at February 27, 2019