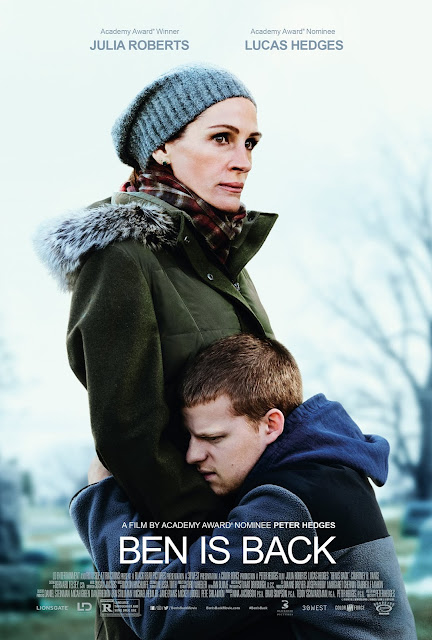 
The opioid crisis has only continued to get worse in America. From the inner-city to the suburbs to the rural farmlands, it has impacted us all.

Ben Is Back is one of the most gripping & emotional films in recent memory to tackle the opioid crisis. The film follows Holly Burns (played by Julia Roberts), a well-to-do mother in New York. She is lovingly married to her second husband Neal Beeby (played by Courtney B. Vance), & they have two young kids together: Lacey (played by Mia Fowler) & Liam (played by Jakari Fraser), along with two kids from Holly's first marriage: Ivy (played by Kathryn Newton) & Ben (played by Lucas Hedges).

On Christmas Eve, Holly & the kids drive home to discover Ben in the driveway. Ben has been in rehab for a few months for his drug addiction, & he is not supposed to be home yet. However, Ben's sponsor suggested that he go home for Christmas. Due to his rehab stint, Ben has been clean for 77 days. Although Holly, Liam & Lacey are happy to see him home, Ivy & Neal are more wary about his reappearance. Holly tells him that he can stay for 24 hours while not leaving her sight, then he must go back to rehab, to which Ben agrees.

While shopping for clothes for the Christmas Eve church service, Ben sees someone from his past who looks at him in a manner that shows that he is coming for Ben. This sets the stage for a 24 hours the family will never forget.

Peter Hedges' direction is excellent. Hedges directs the film with a quiet, subdued touch for the first half, then slowly builds the tension in the second half, all while never making the material feel preachy or didactic.

Stuart Dryburgh's cinematography is terrific. The camerawork is very subdued, letting the events unfold before our eyes, & the color palette is dominated by blues & grays, adding to the bleak tone of the film.

And Dickon Hinchcliffe's score is impeccable. The score is driven by mournful violins, adding to the somber tone of the film.

This is one of the best films of 2018. It's a hard watch, but its talented cast, subdued direction & realistic writing is well worth the emotional rollercoaster.

Ben Is Back was seen by me at the Emagine Novi in Novi, MI on Saturday, January 12, 2019. It is currently in 10 theaters in the Detroit area, including the AMC Forum 30 in Sterling Heights, MI; the AMC Fairlane 21 in Dearborn, MI; the MJR Brighton Towne Square Cinema 20 in Brighton, MI; & the AMC Star Great Lakes 25 in Auburn Hills, MI. Its runtime is 103 minutes, & it is rated R for language throughout & some drug use.
at January 23, 2019