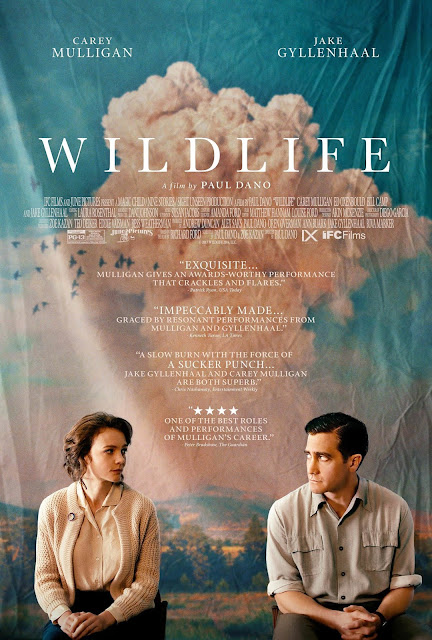 
50% of all marriages in the United States now end in divorce. 60 years ago was it less than half that. But what does happen when the love that was once there or thought to be there disappears?

Wildlife is a devastating look at the breakdown of an American marriage. Based on the 1990 novel Wildlife by Richard Ford, & set in 1960 Great Falls, Montana, the film follows Jeanette Brinson (played by Carey Mulligan), a housewife. Jeanette, her husband Jerry (played by Jake Gyllenhaal), & their teenage son Joe (played by Ed Oxenbould), have recently moved to Great Falls. Jerry has recently got a job at a golf course. Joe is doing well in school. And Jeanette is settling in nicely as a housewife. From the outside, they seem to be a normal American family, which for the most part, they are.

But things start to unravel a bit once Jerry is fired from his job at the golf course. He is eventually offered back his old job, but Jerry, a prideful man, declines, saying he would never work for people like them again. Instead, he takes a lower-paying job as a firefighter, putting out a huge wildfire in the nearby mountains.

Frustrated with Jerry's decision to become a firefighter, & trying to support herself & Joe, Jeanette takes a job as a swimming instructor. There, she takes a liking to one of her students, Warren Miller (played by Bill Camp), a prosperous car dealer. Their attraction starts to grow, & Jeanette doesn't hide it, either. Now Joe can only watch as the marriage of his beloved parents starts to collapse around him.

The cast is fantastic. Carey Mulligan gives one of the best female performances of the year. Jake Gyllenhaal does wonders in his limited screen time, especially towards the end. Ed Oxenbould is a complete revelation. And Bill Camp is slowly starting to reveal himself as one of our finest character actors.

The screenplay by Paul Dano & Zoe Kazan is amazing. The plot is slowly intriguing, the characters feel entirely human, & the dialogue is incredibly authentic.

Diego Garcia's cinematography is wondrous. The camerawork is just gorgeous, & every frame looks like a gigantic portrait.

Amanda Ford's costume design is terrific. The costumes are like how they really were in the 1960s for middle-class families: formal, yet casual, & lovely all the same.

And Akin McKenzie's production design is astounding. The sets are so immersive & so accurate to the time frame that you become a part of classic 1960s America.

This is one of the best films of the year. It's a well-acted film that is also a spectacular directorial debut from Paul Dano.

Wildlife was seen by me at the Michigan Theater in Ann Arbor, MI on Tuesday, November 20, 2018. It is currently in 1 theater in the Detroit area: the Landmark Main Art Theatre in Royal Oak, MI. Its runtime is 105 minutes, & it is rated PG-13 for thematic material including a sexual situation, brief strong language, & smoking.
at December 12, 2018