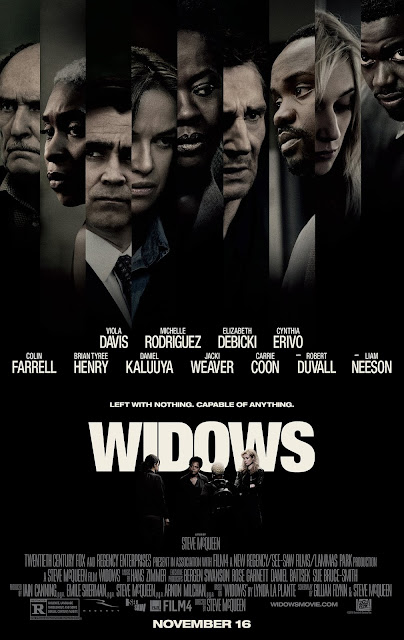 But regular escapism Widows is not. It is escapism, yes, but it is more than that. It is one of the best films of the year so far. Based on the 1983 miniseries Widows by Lydia LaPlante, the film follows Veronica Rawlings (played by Viola Davis), a lobbyist for a teachers' union in Chicago. Her husband, Harry (played by Liam Neeson), along with gambler Carlos Perelli (played by Manuel Garcia-Rulfo), abuser Florek Gunner (played by Jon Bernthal), & Jimmy Nunn (played by Coburn Goss), execute various heists.

One night, Harry, Carlos, Florek & Jimmy are killed in a botched robbery. Soon after, crime boss Jamal Manning (played by Brian Tyree Henry), who the four men stole $2 million from in the botched robbery, comes for Veronica to get the $2 million back. The $2 million was meant to fund his campaign for alderman of the 18th ward against Jack Mulligan (played by Colin Farrell), son of current alderman Tom Mulligan (played by Robert Duvall), & the next man up in the Mulligan family line of politicians. Manning gives Veronica one month to give back the money.

Veronica comes across Harry's notebook where he kept records of his heists to come. She discovers one heist that is worth $5 million. Seeing this as the only way out, Veronica recruits the widows of Harry's partners to get involved in the heist. Two of the widows, Linda Perelli (played by Michelle Rodriguez) & Alice Gunner (played by Elizabeth Debicki), show up to the initial meeting; the fourth widow, Amanda Nunn (played by Carrie Coon), declines to participate. Besides the possibility of being discovered by Jamal & his mob enforcer brother Jatemme (played by Daniel Kaluuya), Linda & Alice both have their own reasons for participating: Linda's store has been repossessed, & Alice has been coerced by her abusive mother, Agnieska (played by Jacki Weaver), into transactional sex work.

When Veronica's chauffeur Bash (played by Garret Dillahunt) is put out of commission, the three soon-to-be robbers are now in desperate need of a driver. Fortunately, they soon find one in Belle (played by Cynthia Erivo), a hairdresser & babysitter of Linda's kids.

As things start to fall in place, the 4 women become more confident that the operation will succeed. But many surprises await for them.

The cast is fantastic. Viola Davis shows nothing but immense power on screen. Her presence is commanding & demands the utmost attention. Davis further cements herself as one of the best actresses in film today.

Elizabeth Debicki is a revelation. Debicki has mainly coasted along in the background in her career, but she finally gets her big break here. She plays her character as timid & submissive, then breaks out of that shell as the film goes on, showing that she is not to be messed with.

Daniel Kaluuya is phenomenal. Kaluuya is menacing at every moment he is on the screen. He is quite possibly the best film villain since Christoph Waltz's Col. Hans Landa in Inglourious Basterds.

The rest of the cast, especially Rodriguez, Erivo, Henry & Duvall, turn in great performances, adding to an already stellar cast.

Steve McQueen's direction is excellent. Besides filling the film to the brim with intensity, McQueen is able to tackle so many different themes, such as police brutality, racism, & corruption, with such precision.

The screenplay by Steve McQueen & Gillian Flynn is brilliant. The plot is intricate & always intriguing, the characters are fully realized, & the dialogue is pitch-perfect.

Sean Bobbitt's cinematography is amazing. Bobbitt's camerawork further heightens the tension, & there are 2 amazing long-takes that are incredibly shot & full of tension.

Joe Walker's editing is terrific. The film is tightly paced, perfectly assembled, & filled to the brim with some amazing cuts.

The sound design is astonishing. From the blazing gunshots to the bombastic explosions, the sounds are precisely created & perfectly mixed.

This is the best heist film ever made. Aside from its amazing cast, it juggles so many themes perfectly while still giving us the thrills we want.

Widows was seen by me at the MJR Marketplace Digital Cinema 20 in Sterling Heights, MI on Friday, November 16, 2018. It is in theaters everywhere. Its runtime is 129 minutes, & it is rated R for violence, language throughout, & some sexual content/nudity.
at December 05, 2018