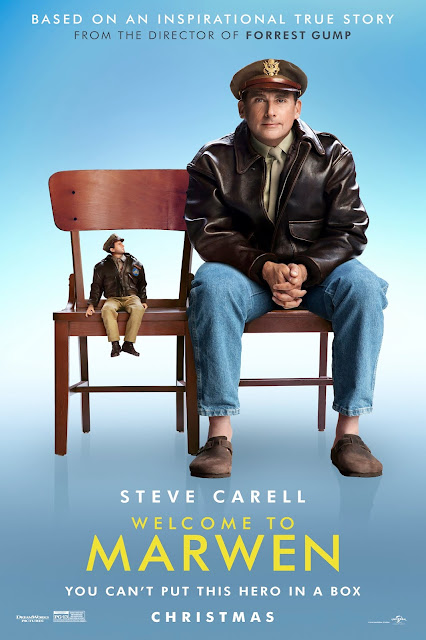 
Hot take: I hate Forrest Gump. Although the cast & visuals are good, everything else is a complete mess. Lately, Robert Zemeckis, who directed Forrest Gump, has been trying to recreate that magic he discovered 23 years ago.

Welcome to Marwen is the closest Zemeckis has come to doing another Forrest Gump - & not in a good way. It's a disappointment. The film follows Mark Hogancamp (played by Steve Carell), a photographer in Kingston, New York. After being beaten by 5 guys outside a bar for telling them that he was a cross-dresser, Mark lost his memory from before the assault. In order to cope with his PTSD & his memory loss, Mark built a 1/6-scale wartime Belgian town called Marwen, populated by dolls, including Capt. Hogie (voiced by Steve Carell) & 5 women, all of them women based off of those that Mark has encountered in real life: Roberta (played & voiced by Merritt Wever), the owner of a hobby shop in Kingston; Julie (played & voiced by Janelle Monáe), a military veteran who helps Mark in physical therapy; Caralala (played & voiced by Eiza González), a bartender; Anna (played & voiced by Gwendoline Christie), Mark's Russian caretaker; & Suzette (played & voiced by Leslie Zemeckis), Mark's favorite actress. These women are his friends & protectors in Marwen & in life. Some Nazi dolls also come through Marwen every so often, looking for Capt. Hogie, & a witch named Deja Thoris (voiced by Diane Kruger) comes through periodically, trying to keep Mark all to herself.

One day, a new neighbor moves in across the street from Mark. The new neighbor is Nicol (played & voiced by Leslie Mann), who has just got out of a relationship with Kurt (played & voiced by Neil Jackson). Mark becomes smitten with Nicol, & makes a doll for her. But something is looming for Mark: the date where he will have to make an impact statement at the sentencing of the 5 men who assaulted him.

The cast is great. Steve Carell gives a very good performance. The rest of the cast does very good work, but this is Carell's show.

Robert Zemeckis' direction is mediocre. Zemeckis's direction is tonally inconsistent, constantly jumping between the unaffecting drama of the real world & the unfunny comedy of the world of the dolls.

And the screenplay by Robert Zemeckis & Caroline Thompson is a misfire. The plot is incredibly deficient, as the way the story is told ends up hindering it. The characterization is very poor outside of Carell's character, & the dialogue is very clunky.

This is a majorly disappointing film. Although Carell gives it his all, he can't overcome defective direction & a terrible screenplay.

Welcome to Marwen was seen by me at the MJR Marketplace Digital Cinema 20 in Sterling Heights, MI on Wednesday, December 26, 2018. It is in theaters everywhere. Its runtime is 116 minutes, & it is rated PG-13 for sequences of fantasy violence, some disturbing images, brief suggestive content, thematic material & language.
at December 31, 2018