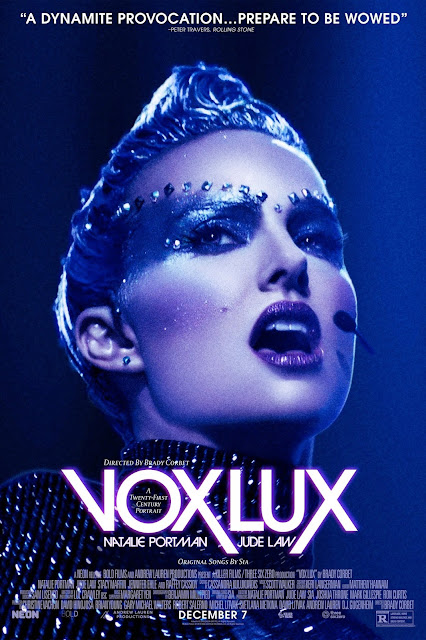 
The rise to fame is a polarizing rise. It can be a wondrous experience, or a terrifying experience that only looks wondrous. And even if you may have the best intentions, down the road, those intentions will be misconstrued.

Vox Lux, while a messy film, is a solid look at the rise of a pop star. Set in 1999 & 2017, & narrated by The Narrator (played by Willem Dafoe), the film follows Celeste Montgomery (played as a young adult by Raffey Cassidy & as an adult by Natalie Portman), a 13-year-old girl at a private school in New York. Celeste lives a pretty normal life for a 13-year-old girl. She always sticks with her older sister, Eleanor, AKA Ellie (played by Stacy Martin).

One day, a student comes into the school armed with an assault rifle & kills multiple students & faculty. Celeste is one of the wounded, & Ellie was not at school that day. After going through hospital care & physical therapy, Celeste & Ellie perform a song they wrote together at a candlelight vigil. The song is titled Wrapped Up. Although it was performed at a vigil, the song shoots its way to the top of the charts. Eventually, Celeste gets a record deal, & hires The Manager (played by Jude Law), a passionate but arrogant man, while also being surrounded by her publicist Josie (played by Jennifer Ehle). In the midst of a short while, Celeste has gone from an ordinary young adult to a extraordinary pop star.

In 2017, Celeste is now 31, & although she is still a successful pop star, she is now very contentious, & the past few years have been marred by scandal. She is now at odds with Ellie, & she is far away most of the time from her 14-year-old daughter, Albertine (played by Raffey Cassidy). However, The Manager & Josie are still by her side. Celeste is about to release her sixth album, Vox Lux, which she says is an album about rebirth populated by sci-fi anthems. But when a terrorist attack in Europe indirectly involves her, Celeste must push to bring herself back into the spotlight with a massive concert in New York.

The cast is fantastic. Natalie Portman gives one of her best performances. Jude Law is terrific. Raffey Cassidy is a revelation. Stacy Martin is amazing. Jennifer Ehle is excellent. And Willem Dafoe provides superb narration.

Brady Corbet's direction is great. Although Corbet tries to juggle a bit too much, I admire his ambitious nature & his sense of visual style.

The screenplay by Brady Corbet & Mona Fastvold is very good. Although the plot starts to crack further on in the film, & the characterization outside of Celeste, The Manager & Ellie is a bit thin, the sharp dialogue is tremendous.

And the soundtrack is phenomenal. Featuring songs by Sia, the pop songs sound authentic, & are also extremely catchy.

This is a good film about the rise to fame. It's definitely flawed, but it has enough gas in the tank to make it worthwhile.