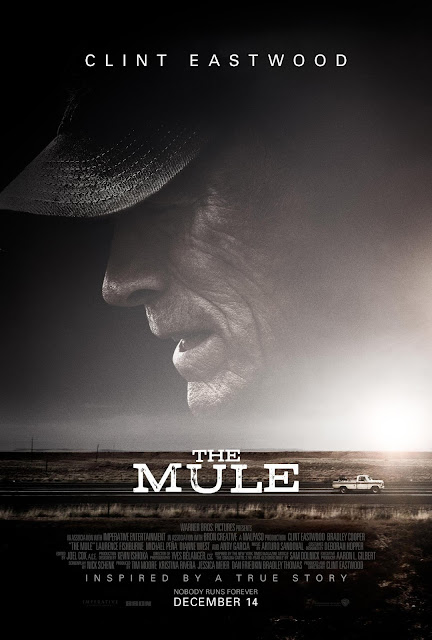 Clint Eastwood is 88 years old. He may quite possibly never get the opportunity to act in or direct another film. If this were to occur, then I'd say it would be nothing short of a very exemplary career for him.

The Mule does have its flaws, but it's easily Eastwood's best film of this decade. Based on the 2014 New York Times article The Sinaloa Cartel's 90-Year-Old Drug Mule by Sam Dolnick, the film follows Earl Stone (played by Clint Eastwood), a horticulturist & Korean War veteran. Earl has become estranged from his wife Mary (played by Dianne Wiest), his daughter Iris (played by Alison Eastwood), & his granddaughter Ginny (played by Taissa Farmiga), as he decided to prioritize his job over his family.

One day, Earl receives a solicitation to deliver packages for some people. He is shocked to discover that he has become a drug mule. However, he decides to continue with this occupation, as his house has been foreclosed, & the drug business is very lucrative.

Meanwhile, in Chicago, DEA Agent Colin Bates (played by Bradley Cooper) has been sent by the DEA Special Agent in Charge (played by Laurence Fishburne) to investigate the cartel deliveries to Chicago that have been led by the boss Laton (played by Andy Garcia). Bates & Agent Trevino (played by Michael Peña) are sent to close in on the deliveries. Eventually, the path of Earl & the path of Bates will cross.

The cast is excellent. Clint Eastwood is still enigmatic at 88, & this is one of his best performances in recent memory. Bradley Cooper also does a great job, especially in one scene with Eastwood. And the rest of the cast provides great support. But this one belongs to Clint Eastwood, as he runs with it the whole way through.

Clint Eastwood's direction is amazing. Eastwood directs the film with a subdued quality unlike any other film of his in a while, & it does wonders here.

And the screenplay by Nick Schenk is great. Although the characterization is a bit thin outside of Eastwood & Cooper's characters, the plot is always intriguing, & the dialogue is very well-written & also very poignant.

This is a very good film. Although it does have some issues, it's nevertheless quietly entertaining, & if this were to be Clint's sendoff, then it would be nothing short of a great sendoff for one of Hollywood's biggest screen legends.

The Mule was seen by me at the MJR Marketplace Digital Cinema 20 in Sterling Heights, MI on Thursday, December 27, 2018. It is in theaters everywhere. Its runtime is 116 minutes, & it is rated R for language throughout & brief sexuality/nudity.
at December 31, 2018