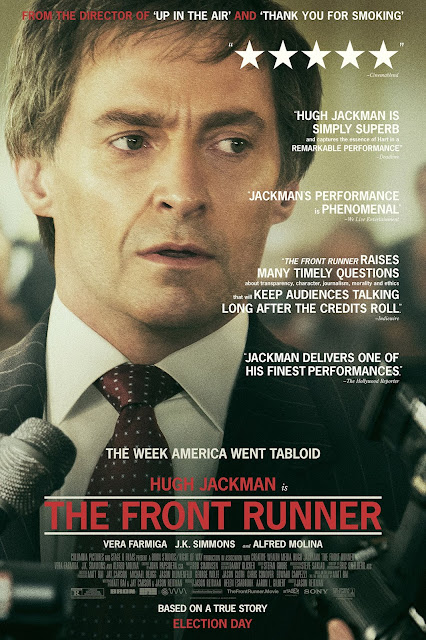 The Front Runner, while flawed, does a good job at taking us back into a time when things like this were actually cared about by the American people. Based on the 2014 book All the Truth is Out: The Week Politics Went Tabloid, & set in 1987, the film follows Gary Hart (played by Hugh Jackman), a Democratic Senator from Colorado. After a second-place finish to Walter Mondale in the 1984 primaries, Hart is running once again for the Democratic nomination for the 1988 election. Every single political pundit is saying that Hart will easily get the nomination & easily win the presidential election, with some polls saying he will win by as high as 12 points. He is definitely the frontrunner for President of the United States.

On the outside, Hart seems like a genuine all-American man. His relationship with his wife Oletha (played by Vera Farmiga) & two kids, Andrea (played by Kaitlyn Dever) & John (played by Evan Castelloe), is extremely rock-solid. He is held in very high regard by both the news media & his campaign team, especially his campaign manager, Bill Dixon (played by J.K. Simmons). Although there are some rumblings about a separation in 1981, there is absolutely no dirt that anyone get on Hart.

One day, while at a restaurant, after being asked some questions by Washington Post reporter A.J. Parker (played by Mamoudou Athie), Hart tells him & other reporters to follow him around, saying they would be very bored & wouldn't find anything. But find they do. Miami Herald reporters Pete Murphy (played by Bill Burr) & Tom Fielder (played by Steve Zissis) hear of a wild party on a yacht that Hart was on. At that party, a photograph was taken of Hart & Donna Rice (played by Sara Paxton) together. They eventually stalk Hart & Rice out in Washington D.C., & eventually Washington Post editor Ben Bradlee (played by Alfred Molina) hears of this & decides to go in on the story. What happened next would change the course of American politics forever.

The cast is fantastic. Hugh Jackman gives a terrifically commanding performance as Gary Hart, embodying all of his mannerisms & his voice. Vera Farmiga & J.K. Simmons provide good supporting performances, & Bill Burr is even better. But this is Jackman's film & he runs with it to the finish line.

Jason Reitman's direction is great. Although Reitman loses his grip somewhat towards the finale, he is able to keep us hooked with his directorial style that is reminiscent of the late, great Robert Altman.

And the screenplay by Matt Bai, Jay Carson & Jason Reitman is very good. The plot loses some steam in the second half, & the characterization is a bit thin outside of Hart, but the dialogue is sharp & full of wit.

This is a good political drama. Although it is flawed (more so in the second half than the first half), it's incredibly well-acted.

The Front Runner was seen by me at the MJR Troy Grand Digital Cinema 16 in Troy, MI on Saturday, November 24, 2018. It is no longer in theaters in the Detroit area. Its runtime is 113 minutes, & it is rated R for language including some sexual references.
at December 18, 2018