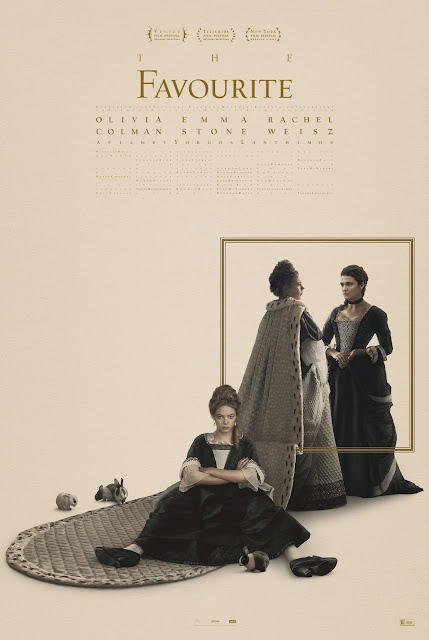 Eclectic. Dark. Whimsical. Humorous. These are just several of the words that can be used to describe Yorgos Lanthimos. With his 2 most recent films, 2016's The Lobster & 2017's The Killing of a Sacred Deer, Lanthimos has made a name for himself as a director of very weird & darkly comedic films that are far outside of the mainstream.

The Favourite is Lanthimos' most commercial film, but he doesn't sacrifice any of his wit in what is definitely his best film yet. Set in 1708 England, the film follows Anne (played by Olivia Colman), the Queen of Great Britain. Suffering from many ailments, Anne is less preoccupied with governing the country & helping oversee a war than she is with duck racing & spending time with her seventeen rabbits, each one representing her dead children. Her confidant & lover, Sarah, Duchess of Marlborough (played by Rachel Weisz), rules the country in Anne's stead; however, prominent landowner & Member of Parliament Robert Harley (played by Nicholas Hoult), tries to limit how much Sarah can control Anne.

One day, Sarah's less fortunate cousin, Abigail Hill (played by Emma Stone), arrives to seek employment. Abigail, once prosperous, has fallen on hard times since her father sold her to a German man to settle a debt. She is hired to perform a menial job as a maid at first, but after applying an ointment to Anne's gout-ridden feet & legs that eases her pain, she is promoted to Sarah's lady-in-waiting.

Eventually, Abigail realizes that she can rise further to the top of Anne's good graces & possibly become her new favorite. As this occurs, Member of Parliament Samuel Masham (played by Joe Alwyn) takes a liking to Abigail, & the relationship between Anne & Sarah starts to deteriorate. This soon turns into a all-out war between Sarah & Abigail to see who will be Anne's favorite. And this will be a war that will leave absolute no one standing in their way, whether it be man, woman, rabbit, or duck.

The cast is spectacular. Olivia Colman gives one of the finest female performances of the year. Colman is finally able to get a lead role, & she does wonders with it. She is cunning, heart-wrenching, scathingly funny, & menacing all at once.

Rachel Weisz gives her best performance in years. Weisz is both cunning & devilish, throwing herself into her character, & she is just wicked here.

Emma Stone gives her best performance. Stone is more than able to master a RP British accent, & is just as cunning & devilish as Weisz.

The rest of the cast, especially Hoult & Alwyn, is absolutely superb, with all of the supporting cast making indelible marks on the film.

Yorgos Lanthimos' direction is terrific. Lanthimos directs this film unlike any other historical film, with his eclectic visual style & his pitch-black sense of humor.

The screenplay by Deborah Davis & Tony McNamara is brilliant. The plot is incredibly intriguing, the characterization is nothing short of perfect, & the dialogue is truly something to behold.

Robbie Ryan's cinematography is fantastic. The camerawork is gorgeously off-beat, with the use of whip pans & the use of fish-eye lenses, all looking so beautiful.

Yorgos Mavropsaridis' editing is excellent. The film is deliberately slowly-paced, letting the plot slowly unfold, & the assembling of shots is marvelous, with every shot lasting perfectly.

Sandy Powell's costume design is gorgeous. The costumes are very period-accurate & so incredibly lovely to look at for hours.

Fiona Crombie's production design is wondrous. The sets are so immersive, transporting you into 1700s England, & so lovely to look at.

This is one of the best films of the year. It's a well-made, well-acted, scathingly funny historical comedy. There has definitely been nothing like this before.