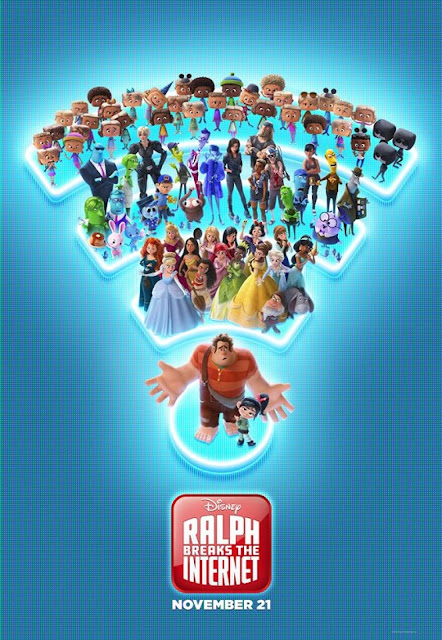 
As someone with an affinity for classic video games, I adored Wreck-It Ralph. It was a glorious throwback to the 1980s arcade gaming heyday.

I was a bit skeptical about Ralph Breaks the Internet, especially after the disaster that was The Emoji Movie, mainly because of its focus around the Internet, apps, & games. But my skepticism was for nothing, as this is a very entertaining & very well-made sequel. The film follows Wreck-It Ralph (voiced by John C. Reilly), the famous villain of the classic arcade game Fix-It Felix Jr. When he isn't doing his wrecking, he spends most of his time hanging out with his best friend Vanellope von Schweetz (voiced by Sarah Silverman), a racer in Sugar Rush. While Ralph is content with his life, Vanellope is looking for something more. In order to make Vanellope happy, Ralph decides to create a new track in Sugar Rush; however, this fails, as this causes the player's control to be overridden, & in the process, causes the player to accidentally break off the wheel. As the company that made Sugar Rush has gone out of business, & the only version of that item on eBay is going for $200, Mr. Litwak (voiced by Ed O'Neill) decides to unplug Sugar Rush, leaving Vanellope & the other 15 racers gameless.

Later that night, Ralph talks with Fix-It Felix Jr. (voiced by Jack McBrayer), who himself is reeling from the Sugar Rush shutdown, as he & his wife, Sgt. Tamora Jean Calhoun (voiced by Jane Lynch) from Hero's Duty, have adopted the other 15 racers from Sugar Rush. Here, Ralph remembers that Mr. Litwak has installed a Wi-Fi router in the arcade, & he decides to take Vanellope with him to the router to get to the Internet to find the wheel.

Once they get to the Internet, they find themselves in the eBay section, & although they get the wheel, Ralph & Vanellope don't understand bidding, so instead of paying $200, they have to pay $27,001, which they do not have, so they must get the money within 24 hours. The two then set off to find ways to get money, which they do, in an attempt to steal a car from the game Slaughter Race. However, they are thwarted by Shank (voiced by Gal Gadot), the main character of Slaughter Race. In order to help Ralph & Vanellope with the money, Shank sends them to her friend Yesss (voiced by Taraji P. Henson), the algorithm of BuzzTube. Along the way, Ralph & Vanellope encounter search engine KnowsMore (voiced by Alan Tudyk) & virus creator Double Dan (voiced by Alfred Molina). But they both start to have differing dreams, as Ralph wants everything to be the same, but Vanellope wants to stay in Slaughter Race, starting an awakening for them both.

The voice cast is fantastic. John C. Reilly, as always, is goofy & warm-hearted. Sarah Silverman is also a burst of humor. And the rest of the cast gives great supporting voice performances.

The direction by Rich Moore & Phil Johnston is excellent. Moore & Johnston are able to improve on the original through the world-building & keeping the interest at a high level.

The screenplay by Phil Johnston, Pamela Ribon, Rich Moore, Jim Reardon & Josie Trinidad is amazing. The plot is warm-hearted, the characterization is fully fleshed out, & the dialogue is often humorous.

And the animation is spectacular. Every set piece is visually stunning, & the attention to detail is nothing short of incredible.

This is one of the best animated films of the year. It's one of the few sequels that is better than the original, & is so funny & warm-hearted.

Ralph Breaks the Internet was seen by me at the MJR Marketplace Digital Cinema 20 in Sterling Heights, MI on Saturday, December 8, 2018. It is in theaters everywhere. Its runtime is 112 minutes, & it is rated PG for some action & rude humor.
at December 19, 2018