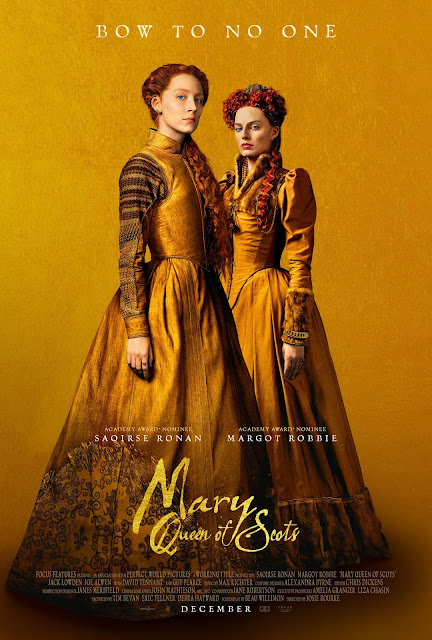 
Lately, I've become interested in the monarchies of Europe, especially those of the UK & France. I'm fascinated by how these people came to power & eventually fell from power.

Mary Queen of Scots is flawed, but it's a very well-acted & well-designed film. Based on the 2004 biography Queen of Scots: The True Life of Mary Stuart by John Guy, & set between 1561 & 1587 UK, the film follows Mary, Queen of Scots (played by Saoirse Ronan), who has returned to Scotland after spending many of her formative years in France. She has returned to take her place at the throne as the Catholic Queen of Scotland. This is not an easy task, as her Protestant cousin, Elizabeth I, Queen of England (played by Margot Robbie), is leader of England & Scotland, along with the rest of the UK.

However, Mary is not well-liked in Scotland by some, especially John Knox (played by David Tennant), a Protestant cleric. After refusing to marry for some time, she eventually marries Lord Darnley (played by Jack Lowden), & they eventually have a son, James. Mary also decides to take the throne from Elizabeth, as she would be next in line for the throne if Elizabeth fails to produce an heir.

In England, Elizabeth is guarded by her advisor William Cecil (played by Guy Pearce), & is in love with Robert Dudley (played by Joe Alwyn). However, she is unable to produce an heir due to reasons with Dudley.

With both fighting for power in a masculine world, Mary & Elizabeth try their hardest to remain peaceful. But betrayal & rebellion will soon follow.

Josie Rourke's direction is great. Although some moments lag, Rourke is able to sustain the film with her visual style & her stage background, making this a well-made directorial debut for Rourke.

Beau Willimon's screenplay is very good. Although the plot is a bit cumbersome, & the narrative is a bit lagging, the clever dialogue is what definitely sticks out.

James Merifield's production design is superb. The sets are very period-accurate & extravagant, & immerses the audience in the time frame.

This is a solidly made film. It does have some flaws, but it is saved by its two spectacular lead performances & its period elements.

Mary Queen of Scots was seen by me at the Emagine Rochester Hills in Rochester Hills, MI on Sunday, December 23, 2018. It is in theaters everywhere. Its runtime is 124 minutes, & it is rated R for some violence & sexuality.
at December 30, 2018