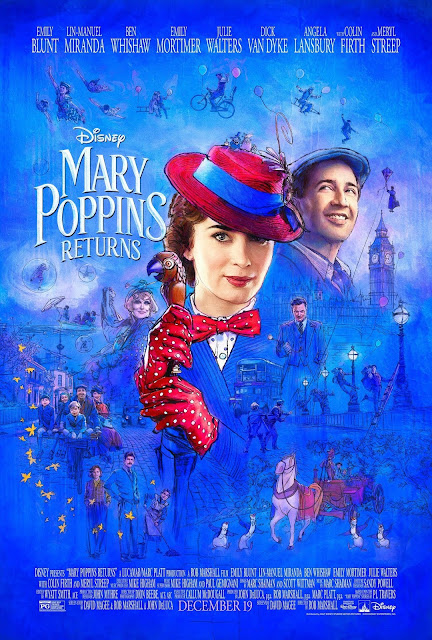 
I barely remember watching Mary Poppins when I was a young kid, but I definitely remember loving it. It's an absolute classic that is one of Disney's finest.

Since his wife Kate died, Michael has been financially stressed, going so far as to taking out a loan from the bank at which he works. However, he is informed by associates sent by bank president William Weatherall Wilkins (played by Colin Firth) that he must repay the loan in full by the coming Friday or his house will be repossessed. Although their father did leave them shares in the bank, Jane & Michael are unable to find the certificate of authenticity, & bank chairman Mr. Dawes Jr. (played by Dick Van Dyke) is considered by Wilkins to be of unsound mind at his old age, so he is unable to help.

Mary Poppins comes back to help out the Banks family, while taking the Banks children on wild adventures, encountering very whimsical people, such as Mary's cousin Topsy (played by Meryl Streep) & The Balloon Lady (played by Angela Lansbury). However, the plan to keep the Banks home looks very unlikely. But with the help of chimney sweep Jack (played by Lin-Manuel Miranda), Mary & the Banks family might just be able to pull it off with a lot of magic & imagination.

The cast is superb. Emily Blunt brings so much charm & loveliness to the role. Lin-Manuel Miranda is delightfully endearing. And the rest of the cast provides great support.

Rob Marshall's direction is great. Although there are some moments that are a bit derivative, Marshall is able to overcome those flaws with a lot of visual style & a warm-hearted sensibility.

The screenplay by David Magee, Rob Marshall & John DeLuca is amazing. The plot is intriguing, the narrative is entirely warm-hearted, & the dialogue is well-written.

Dion Beebe's cinematography is wondrous. The color palette is incredibly lovely, & the camerawork is visually enticing.

Wyatt Smith's editing is excellent. The film floats along at a brisk pace, & there isn't a single jarring or bad edit throughout the film.

Sandy Powell's costume design is fantastic. The costumes are colorful, period-accurate, & very lovely to look upon.

John Myhre's production design is gorgeous. The sets are so accurate to 1930s London, & immerse you in the time frame.

The sound design is impeccable. The various sounds created by the objects in the whimsical world are so incredibly immersive.

The visual effects are stunning. The CGI feels impressively realistic, not looking like poorly-made green screen at all.

And the music is terrific. The score by Marc Shaiman is very beautiful, perfectly accompanying the film. And the original songs further help tell the story, & are very catchy & well-made.

This is a great sequel. Although it slightly pales in comparison to the original, it is a very charming & well-made sequel that is better than many sequels.

Mary Poppins Returns was seen by me at the MJR Marketplace Digital Cinema 20 in Sterling Heights, MI on Saturday, December 22, 2018. It is in theaters everywhere. Its runtime is 130 minutes, & it is rated PG for some mild thematic elements & brief action.
at December 29, 2018