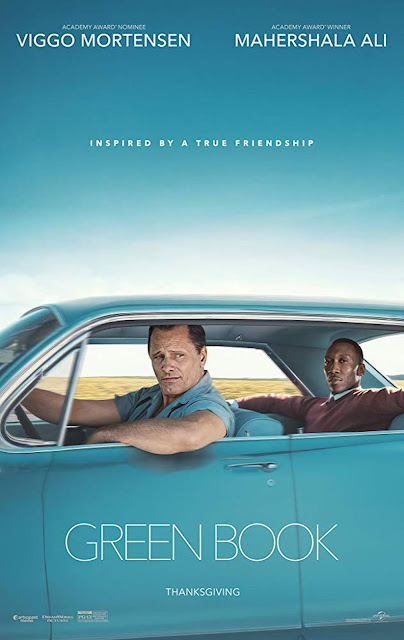 
It's 2018. I for one think it's time we decided to not make films that are just oozing white guilt anymore. And for those of you who don't know what white guilt is, it's making white people feel bad about racism, but not too bad as to alienate them.

Green Book, despite a few good aspects, is a blandly-made film that just screams white guilt. Set in 1962, the film follows Frank "Tony Lip" Vallelonga (played by Viggo Mortensen), a bouncer at a nightclub in New York. He lives with his long-suffering wife Dolores (played by Linda Cardellini) & his two sons: Nick (played by Hudson Galloway) & Frankie (played by Gavin Lyle Foley) in a small apartment.

Once the nightclub is closed for renevations, Tony must look for work, as his family is very poor. One day, he gets an interview with Don Shirley (played by Mahershala Ali), an African-American pianist looking for a driver for his upcoming eight-week tour, most of which will occur in the Deep South. As it is still very segregated, Don needs someone who will keep him out of trouble. After initially being declined, Tony is hired by Don to be his driver. Before leaving, Tony is given a copy of the Green Book, a book detailing places where African-Americans are welcome in the Deep South. They plan to be back on Christmas Eve.

After starting in the Midwest, they find their way in the Deep South. While they travel, Tony & Don bicker, with Tony being racist & refusing to act properly, & Don being disgusted by Tony's gross habits. Eventually, as Don helps Tony with writing letters to Dolores, the two become friends in a roundabout way.

As they get deeper into the South, racial tensions frequently arise, as Don cannot go to places Tony can go to, & Tony & Don are treated very differently by the populace, as it was in the 1960s American South. Tony begins to change his ways as the trip goes on, but they will both face a hard road ahead.

The cast is good. Viggo Mortensen is good. Mahershala Ali does a very good job, & is one of the few truly great things about the film. And their chemistry is solid.

Peter Farrelly's direction is bad. Farrelly's style is incredibly bland, failing to make something of note that differentiates himself from other directors. He's better off teaming up with his brother Bobby & doing another raunchy comedy again.

And the screenplay by Peter Farrelly, Brian Hayes Currie & Nick Vallelonga (Tony's son) is awful. The plot is incredibly contrived, & many of the events of the film were false & did not occur as they did. The family of Don Shirley has come out & said that Tony & Don were not really friends. Also, the plot portrays racism incredibly safely, which is not what we need now. The characterization is very thin. And the dialogue is cringe-worthy.

This is a very disappointing film. If this film manages to get an Academy Award nomination for Best Picture (which it probably will), it would easily be the worst Best Picture nominee since Extremely Loud & Incredibly Close.

Green Book was seen by me at the MJR Marketplace Digital Cinema 20 in Sterling Heights, MI on Wednesday, November 21, 2018. It is in theaters everywhere. Its runtime is 130 minutes, & it is rated PG-13 for thematic content, language including racial epithets, smoking, some violence & suggestive material.
at December 17, 2018