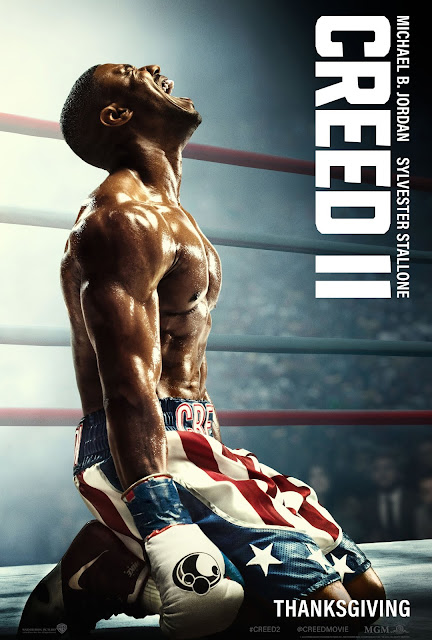 As a kid, I loved the Rocky franchise. I owned every film on DVD, & would watch them all (especially Rocky III & Rocky Balboa). Eventually, I distanced myself from those films, but came back to them after enjoying Creed, which was one of the best films of 2015.

Creed II, while not as great as the first, is a very good & very admirable sequel. The film follows Adonis Creed (played by Michael B. Jordan), who after defeating Danny "Stuntman" Wheeler (played by Andre Ward), is the newest heavyweight champion of the world. After winning the heavyweight championship, Adonis proposes to his long-time girlfriend, singer-songwriter Bianca Taylor (played by Tessa Thompson), who accepts his proposal. They talk about possibly leaving Philadelphia for a new life in Los Angeles; while Bianca wants to move to Los Angeles, Adonis is less inclined to leave Philadelphia behind, especially his trainer, former heavyweight champion Rocky Balboa (played by Sylvester Stallone).

One night, former Soviet boxer Ivan Drago (played by Dolph Lundgren), shows up in Rocky's restaurant. Ivan, who lost 33 years prior to Rocky on Christmas Day in Moscow, wants Adonis to fight his son, Viktor (played by Florian Munteanu). Although Adonis accepts, Rocky refuses to train him for the fight; Adonis then leaves with Bianca for Los Angeles.

With the knowledge that Ivan killed his father in a match 33 years ago, Adonis is overwhelmed by the fight. Eventually, Adonis & Rocky reconcile, & hire Tony "Little Duke" Evers Jr. (played by Wood Harris) as an assistant trainer. With the help of Rocky, Little Duke, & his adoptive mother, Mary Anne (played by Phylicia Rashād), Adonis trains his hardest for this match. But the match will be a very tough one.

The cast is amazing. Michael B. Jordan continues to cement himself as one of the brightest stars in Hollywood today. Sylvester Stallone gives another great performance. Tessa Thompson gives a great supporting performance. And Dolph Lundgren shows that he does have some acting talent with his performance.

Steven Caple Jr.'s direction is excellent. Caple Jr. is able to keep us at the edge of our seats with his thrilling oversight, especially during the boxing scenes.

And the screenplay by Juel Taylor, Sylvester Stallone, Sascha Penn & Cheo Hodari Coker is great. Although the plot is predictable, the characterization is well-developed, & the dialogue is very well-written.

This is a very good sequel. Although it does have a few flaws, they are overcome by an excellent cast & great direction.

Creed II was seen by me at the MJR Marketplace Digital Cinema 20 in Sterling Heights, MI on Saturday, December 15, 2018. It is in theaters everywhere. Its runtime is 130 minutes, & it is rated PG-13 for sports action violence, language, & a scene of sensuality.
at December 20, 2018