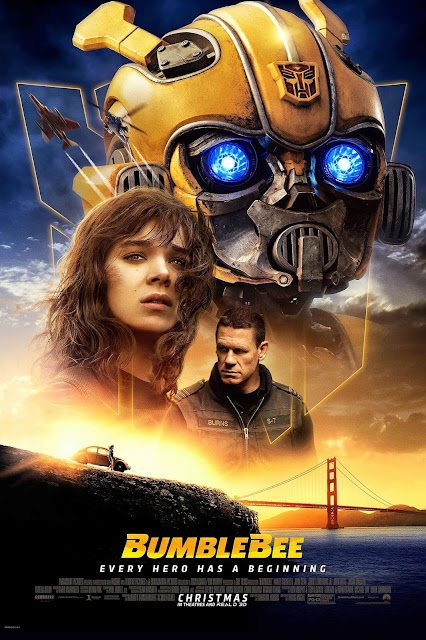 I only liked the first Transformers film. I saw pieces of Transformers: Revenge of the Fallen, but I didn't care for what I saw. I haven't seen the other 3 Transformers films, but I think I know how they went: a bunch of big explosive robot fights, with some bad editing, shots of scantily-clad women, & no room for characterization. I think I got it right, & that's what I'd expect from Michael Bay, the worst director ever.

Bumblebee, while just shy of perfect, is a fresh change of pace for the franchise. Set in 1987, the film follows Charlie Watson (played by Hailee Steinfeld), a teenage girl in California. She lives with her mother Sally (played by Pamela Adlon), her stepfather Ron (played by Stephen Schneider), & her brother Otis (played by Jason Drucker). Charlie is angry at her mom for remarrying so soon after her father's death.

One day, Charlie finds a 1967 Volkswagen Beetle in a scrapyard owned by her Uncle Hank (played by Len Cariou), which she is given as a birthday present. It's not long after that Charlie realizes that her car is not just any ordinary Volkswagen Beetle. It is B-127 (voiced by Dylan O'Brien), an Autobot who has fled to Earth from Cybertron to create a base for other Autobots. B-127 is unable to speak, as his voice box has been ripped out by Blitzwing (voiced by David Sobolov), a Decepticon. Charlie nicknames B-127 Bumblebee.

Bumblebee's homing signal has attracted 2 major Decepticons: Shatter (voiced by Angela Bassett), who can turn into a Plymouth Satellite & a Harrier Jump Jet; & Dropkick (voiced by Justin Theroux), who can turn into an AMC Javelin & a Bell AH-1 SuperCobra. It has also attracted Memo (played by Jorge Lendenborg Jr.), a nerdy co-worker of Charlie, who is attracted to her. He promises to keep Bumblebee a secret. But Bumblebee receives attention from two men from Sector 7: Col. Jack Burns (played by John Cena) & Dr. Powell (played by John Ortiz). Now Charlie & Memo must protect Bumblebee from Sector 7 & the Decepticons at all costs.

The cast is superb. Hailee Steinfeld cements herself as one of our finest young actresses. John Cena is delightfully funny. And the rest of the cast provides great support.

Travis Knight's direction is great. Although there are a couple issues involving some early action sequences, Knight overcomes them with a great mix of style & substance, & the ability to let moments set in with the audience.

Christina Hodson's screenplay is amazing. The plot is intriguing, the narrative is more character-driven, the characterization is excellent, & the dialogue is often very funny.

And the visual effects are stunning. The CGI is very well-done & polished, which is surprising, as the film had a much smaller budget than the previous Transformers films. But that shows that sometimes, less is more.

This is a great surprise. Although it does have a couple flaws, it's easily the best film of the Transformers franchise.

Bumblebee was seen by me at the MJR Marketplace Digital Cinema 20 in Sterling Heights, MI on Wednesday, December 26, 2018. It is in theaters everywhere. Its runtime is 114 minutes, & it is rated PG-13 for sequences of sci-fi action violence.
at December 30, 2018