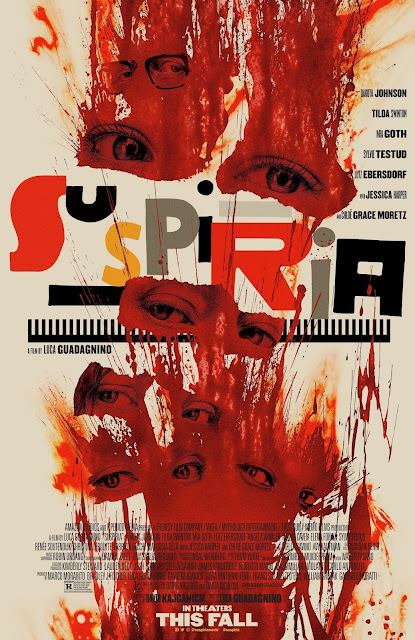 
Dario Argento's 1977 giallo horror film Suspiria is considered by many film historians to be one of the best films of its genre. The film's striking cinematography, stylish direction, & terrific acting continue to be acclaimed many years after its release. Although I have never seen it, it is one that I plan to watch soon.

When I heard that they would be making a reimagining of Suspiria, I had mixed feelings. Although Luca Guadagnino is a terrific director, & the cast was amazing, I was a bit concerned that he might not be able to work well in this genre, this being outside of his usual drama films.

But I should've never doubted him. Suspiria is a spectacular reimagining of the original film. Based on the 1977 film Suspiria, & set in 1977 Berlin, the film follows Susie Bannion (played by Dakota Johnson), a young woman from a Mennonite family in Ohio, led by Mrs. Bannion (played by Małgosia Bela). She has moved to West Berlin to join the prestigious Markos Dance Academy, into which she has been admitted. The Markos Dance Academy has been reeling from the disappearance of student Patricia Hingle (played by Chlöe Grace Moretz). She had disappeared after alerting her psychiatrist Dr. Josef Klemperer (played by Lutz Ebersdorf), who himself lost his wife Anke (played by Jessica Harper) while in a concentration camp, that the academy is run by a coven. Patricia's notebook mentions The Three Mothers: Mother Tenenbrarum; Mother Lachrymarum, & Mother Suspiriourum.

While this occurs, the matrons of the academy are arguing whether Mother Helena Markos (played by XXXXX XXXXXXX) or Madame Blanc (played by Tilda Swinton) should be the leader of the coven. The matrons are Miss Tanner (played by Angela Winkler); Miss Vendergast (played by Ingrid Caven); Miss Griffith (played by Sylvie Testud); Miss Huller (played by Renée Soutendijk); Miss Balfour (played by Christine LeBoutte); Miss Millius (played by Alek Wek); & Miss Kaplitt (played by Brigitte Cuvelier).

The academy includes Olga Ivanova (played by Elena Fokina), Flava (played by Fabrizia Sacchi), & Sara Simms (played by Mia Goth), with whom Susie starts a friendship. Eventually, Susie rises to the top of the academy. But things start to turn more for the worse at the academy, leaving everyone to wonder what will happen to them.

The cast is fantastic. Dakota Johnson shows that she is not only a good a good actress, but a great one. Tilda Swinton is amazing once again. And Lutz Ebersdorf gives a great debut performance. Some have theorized that Lutz Ebersdorf is just Tilda Swinton in a ton of makeup, but I doubt it.

Luca Guadagnino's direction is excellent. Guadagnino goes for a muted style for this reimagining, & it works wonders. And he focuses in on pure terror rather than jump scares, which also works wonders.

David Kajganich's screenplay is brilliant. Kajganich does a great job of reimagining Suspiria by updating some stuff. Also, the plot is very intricate, the characters are intriguing, the dialogue is terrific, & the themes, such as motherhood, abuse of power & national guilt are very well-developed & well-thought out.

Sayombhu Mukdeeprom's cinematography is gorgeous. The color palette is very muted, with no primary colors, & that helps add to the creepy feel of the film.

Walter Fasano's editing is phenomenal. There aren't any bad cuts or edits, & the film is intentionally slow-paced, making it an intensely slow burn.

The makeup & hairstyling is outstanding. The makeup is absolutely transformative yet never over-the-top, especially for some characters.

The sound design is impeccable. The eerie sounds dig deep into the audience's souls, further increasing the tension.

And Thom Yorke's music is incredible. The original songs he wrote are beautifully made & terrifically written. And the original score is very eerie, helping build the tension.

This is not one of the best films of the year, but one of the best of the decade. It's a cinematic accomplishment of the highest order. It's definitely divisive, but I thoroughly enjoyed it.