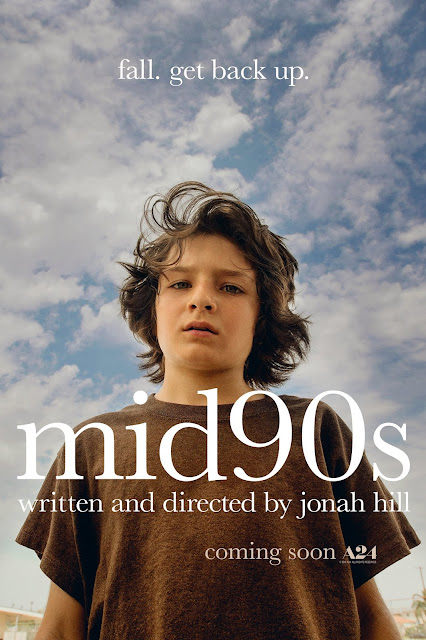 
Many actors & actresses have gone behind the camera recently, especially in the past 2 years. Last year, Greta Gerwig did Lady Bird, which, as you all know, is my favorite film of all time. This year has given us even more directorial debuts by actors & actresses. Bradley Cooper has become an Oscar frontrunner for Best Director for A Star Is Born, & Paul Dano has received critical acclaim for his work on Wildlife.

Mid90s is a flawed but overall solid directorial debut for Jonah Hill. Set in mid-1990s Los Angeles, the film follows Stevie (played by Sunny Suljic), a 13-year-old boy in a broken home. His older brother, Ian (played by Lucas Hedges), is abusive, & his mother, Dabney (played by Katherine Waterston), struggles to keep the family afloat.

One day, Stevie rides his bike past a skateshop, & notices the skaters outside the shop. He returns there the next day. He then meets the group of skaters: Ruben (played by Gio Galicia); Ray (played by Na-kel Smith); Fuckshit (played by Olan Prenatt); & Fourth Grade (played by Ryder McLaughlin). At first, they merely tolerate Stevie's presence, but they eventually include him, nicknaming him "Sunburn."

Eventually, Stevie becomes a good skater, but after suffering a head injury while skating, Dabney becomes concerned that Stevie is getting involved with the wrong crowd; however, Stevie is defiant that he will stay in the group. But as Stevie starts to become like the people in the group, the group may end up falling apart.

The cast is amazing. Sunny Suljic proves himself to be a talented young actor. Lucas Hedges further cements himself as one of our best young actors. And Katherine Waterston further shows that she is one of the most underrated actresses in film.

Jonah Hill's direction is very good. Hill does hit a few bumps as to pacing & stylistic choices, but these are normal bumps for a debut director, & he does handle tonal shifts very well. I think he can only get better from here.

Jonah Hill's screenplay is good. Although the plot is a bit too aimless & the characterization is a bit thin with some characters, Hill is able to overcome those flaws with incredibly realistic (& hilarious) dialogue.

And the score by Trent Reznor & Atticus Ross is excellent. The score is very ambient in nature, & since I really enjoy those types of scores, it's no wonder that I enjoyed the score here.

This is a solid coming-of-age film. It is definitely flawed, but it's the cast & the score that truly save the film, & I know that Jonah Hill will definitely improve after this.

Mid90s was seen by me at the MJR Marketplace Digital Cinema 20 in Sterling Heights, MI on Friday, October 26, 2018. It is in theaters everywhere. Its runtime is 85 minutes, & it is rated R for pervasive language, sexual content, drug & alcohol use, some violent behavior/disturbing images - all involving minors.
at November 05, 2018