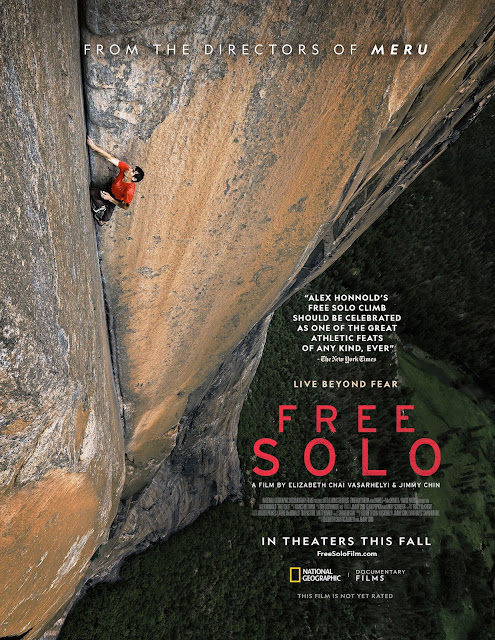 And that is the subject of Free Solo, an absolutely thrilling & vivacious documentary. The film follows Alex Honnold, a free-solo rock climber, which means that he goes rock climbing without any protective equipment, which seems like an absolutely insane thing to do, but it's something to admire. A climber since he was 5, Honnold has lived almost his entire life with a deeply intense passion for climbing.

Honnold is preparing for his biggest climb yet: a free-solo climb of El Capitan in Yosemite National Park. The climb is about 3,200 feet, traversing through difficult terrain, going up & down. It is incredibly dangerous, possibly the most dangerous of all of his climbs. He has thought about doing it since 2006, but he has pushed it off every year until now.

Everyone around Honnold is nervous about this attempt, from the directors of the documentary, to fellow free-solo climber Tommy Caldwell, to Honnold's girlfriend, Sanni McCandless. Honnold is absolutely sure that he can do this. But the attempt will prove to be intensely difficult for everyone involved.

The direction by Elizabeth Chai Vasarhelyi & Jimmy Chin is excellent. Vasarhelyi & Chin manage to treat Honnold as someone who is determined but not insane (although what he is doing might end up sounding incredibly insane). Also, they make the film interesting & nail-biting, especially in the final half-hour.

This is one of the best documentaries of the year. It's a intensely thrilling documentary about a man who is determined to accomplish his big goal.