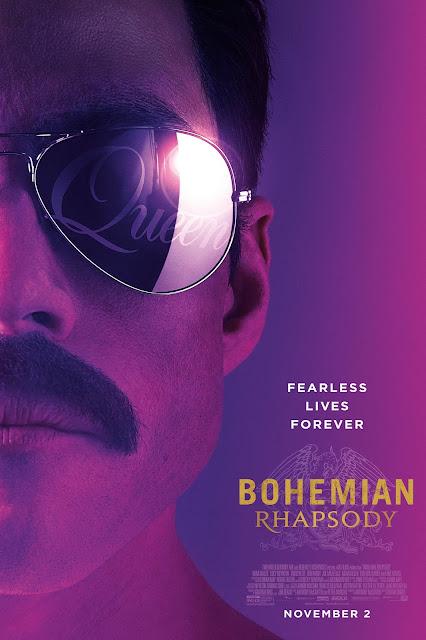 
Queen was one of the greatest rock bands of all time. Their songwriting, their talent, & their stage presence made Freddie Mercury, Brian May, Roger Taylor & John Deacon legends. Only a film as legendary as them would suffice.

Bohemian Rhapsody, despite some promise, is not legendary. It's ultimately a middling film. Set from 1970-1985, the film follows Farrokh Bulsara (played by Rami Malek), a British luggage handler at Heathrow Airport of Indian Parsi descent. One night, Farrokh attends a concert at a nightclub for the band Smile. After the concert, he meets the band's guitarist, Brian May (played by Gwilym Lee), &  the band's drummer, Roger Taylor (played by Ben Hardy). Farrokh auditions to become their new lead singer, as their former lead singer, Tim Staffell (played by Jack Roth), leaves to join Humpy Bong; he eventually receives the role. After bassist John Deacon (played by Joe Mazzello) joins on, they become Queen.

After recording their debut album, Queen signs with EMI, hires John Reid (played by Aidan Gillen) as their manager, & hires Jim Beach (played by Tom Hollander) as their lawyer. Also, Farrokh changes his name to Freddie Mercury, & starts a relationship with Mary Austin (played by Lucy Boynton), eventually becoming engaged to her. However, as Queen goes on tour in the US, Freddie becomes confused about his sexual orientation.

In 1975, Queen records A Night at the Opera, but EMI executive Ray Foster (played by Mike Myers) refuses to have Bohemian Rhapsody released a single, saying it is too long. Despite mixed reviews, Bohemian Rhapsody becomes a smash hit.

Queen remains a successful band into the 1980s, but inner turmoil starts to threaten the band. Freddie's attitude & the musical direction threaten to tear the band apart. But when Live Aid comes up, Queen may have a chance at getting back to the top.

The cast is great. Rami Malek is fantastic as Freddie Mercury, almost looking exactly like him & acting like him. Lucy Boynton, Gwilym Lee, Ben Hardy, Joe Mazzello & Tom Hollander provide great supporting performances. But Mike Myers is way too distracting in his short screen time, chewing up way too much scenery.

Bryan Singer's direction is poor. There's nothing of substance or style that really makes the film stick out, ultimately making the film feel dull. The Live Aid sequence is well-made, but it isn't enough to make the direction good overall. Also, Singer is a pedophile, & he should not be working in film at all.

The screenplay by Anthony McCarten & Peter Morgan is mediocre. The plot is basic, the dialogue is cheesy, & the narrative takes far too many liberties with historical facts.

John Ottman's editing is horrendous. The editing is comprised of one thing used way too much in film today: quick editing. It is so incomprehensible & could give you a headache.

Julian Day's costume design is amazing. The costumes are period-accurate, colorful, & absolutely lovely to look at.

The sound design is excellent. All the songs are excellently edited & mixed into the film, especially during the concert scenes, mainly the Live Aid sequence.

And the soundtrack is fantastic. There are so many songs by Queen that are played throughout the film, & all of them are spectacular.

This is a mixed bag of a film. Although the performances, costume design, sound design & soundtrack are great, everything else is a huge mess.

Bohemian Rhapsody was seen by me at the MJR Marketplace Digital Cinema 20 in Sterling Heights, MI on Thursday, November 1, 2018. It is in theaters everywhere. Its runtime is 134 minutes, & it is rated PG-13 for thematic elements, suggestive material, drug content & language.
at November 05, 2018