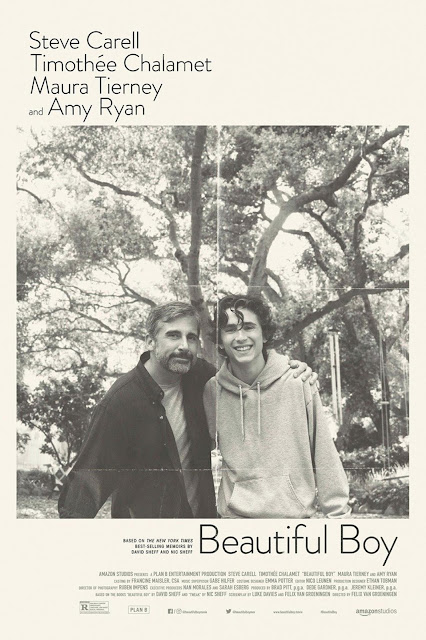 Addiction is everywhere. It no longer affects just poor communities or marginalized communities. It affects us all, in one way or another. And many of us are helpless in fighting this disease.

Beautiful Boy is one of the most heartbreaking depictions of addiction I've ever seen. Based on the 2008 book Beautiful Boy: A Father's Journey Through His Son's Addiction by David Sheff & the 2008 book Tweak: Growing Up on Methamphetamines by Nic Sheff, the film follows David Sheff (played by Steve Carell), a freelance journalist. He is happily married to his second wife, Karen Barbour (played by Maura Tierney), & has three children: Nic (played by Timothée Chalamet), who is from his first marriage to Vicki (played by Amy Ryan); Jasper (played by Christian Convery); & Daisy (played by Oakley Bell & Carlee Maciel). They seem just like any other upper-middle class family.

Except they aren't. Nic went missing one night & came back showing signs of drug use. David takes him to a rehab facility, & Nic is eventually transferred to a halfway house, where he is given more freedoms. However, Nic goes missing, & when David finds him, he is shocked to hear that Nic was not only experimenting with marijuana, but he has also experimented with cocaine, ecstasy & crystal meth.

Nic goes through sobriety again, & he eventually goes to college to become a writer. However, he falls back into the same old habits again. As Nic's addiction continues, David tries harder & harder to save him. But it will take more than he alone can give.

The cast is spectacular. Steve Carell & Timothée Chalamet each give some of their best performances yet. Maura Tierney gives a terrific performance. And Amy Ryan does a lot with her limited screen time.

This is an amazing film. It has excellent direction & great writing, but above all, it boasts some absolutely fantastic performances.