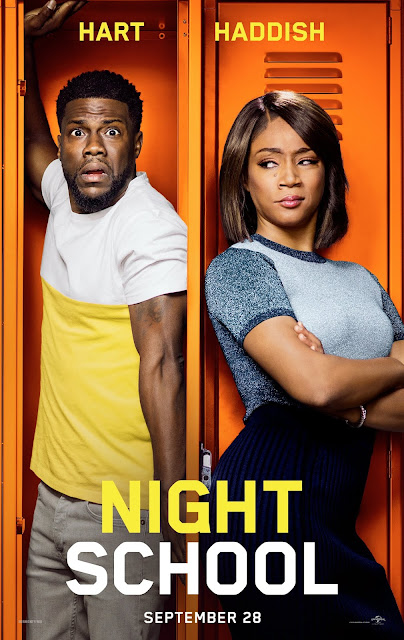 Stupid humor, in most instances, never really struck a chord with me. It just seemed like a lot of gross-out humor that was just gross for the sake of being gross. However, some stupid humor I do like, especially the types of humor that Kevin Smith, Seth Rogen, & Dave Chappelle specialize in.

Night School is absolutely dumb & stupid, but it's pretty funny. The film follows Teddy Walker (played by Kevin Hart), a grill salesman in Atlanta. He is in a steady relationship with his long-time partner, Lisa (played by Megalyn Echikunwoke), & he is going to become manager of the grill store when the manager retires. Although Teddy may seem like he has it all, he is financially unstable.

To celebrate his eventual promotion, Teddy takes Lisa into the shop, pulls out some wine, & proposes to her. She says yes. However, as they celebrate, Teddy pops open a bottle of champagne, & the champagne cork pops open a gas tank. Minutes later, the store explodes, & the owner runs away with the insurance money.

Jobless & unable to tell Lisa about his real financial state, Teddy turns to his best friend, Marvin (played by Ben Schwartz), who works at a major financial investment firm. Marvin tells him that he could get a job, but Teddy needs to get his GED, as Teddy dropped out of high school due to struggling to concentrate during the SAT.

Teddy then heads back to his old high school, hoping to charm the principal into giving him the GED. However, the principal is Stewart (played by Taran Killam), Teddy's old classmate who was bullied by Teddy during their high school years. Stewart refuses to let Teddy get his GED, but thankfully, Carrie (played by Tiffany Haddish), the special ed & night school teacher, lets Teddy get in, but Teddy & Carrie are definitely at odds with each other.

After a few days, the class is intimidated by Carrie's teaching, & feel that they can't pass. So they decide to steal the test results. But this caper will not end well for them.

The cast is great. Kevin Hart shows once again that he's one of the funniest men in film. Tiffany Haddish shows that she's the funniest woman in film. And the rest of the cast pulls out some good humorous performances.

And the screenplay by Kevin Hart, Harry Ratchford, Joey Wells, Matt Kellard, Nicholas Stoller & John Hamburg is good. Although the plot is very predictable & the characterization is a bit thin, the humorous dialogue shines through.

This is an ok but funny comedy. Although it is dumb & stupid, it's funny enough to make it into something that's worthwhile.

Night School was seen by me at the MJR Marketplace Digital Cinema 20 in Sterling Heights, MI on Friday, September 28, 2018. It is in theaters everywhere. Its runtime is 111 minutes, & it is rated PG-13 for crude & sexual content throughout, language, some drug references & violence.
at October 04, 2018