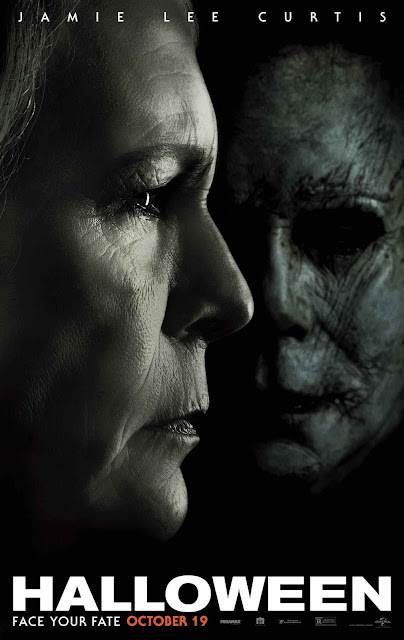 The original 1978 version of Halloween is nothing short of a horror masterpiece. It was a complete game-changer for the genre, instituting many of the common aspects that we see today, & executing them better than modern horror films, relying more on pure terror than just plain jump scares. However, after that, the franchise had become bogged down by many poor sequels, reboots & remakes.

Halloween, while not quite reaching the level of the original, is a more-than-serviceable sequel. The film follows Laurie Strode (played by Jamie Lee Curtis), the sole survivor of the attacks committed on Halloween 1978 in Haddonfield, Illinois by Michael Myers (played by Nick Castle & James Jude Courtney). Laurie has suffered from PTSD since that night, & lives in a heavily guarded home, estranged from her daughter Karen (played by Judy Greer) & her granddaughter Allyson (played by Andi Matachak).

On Halloween Eve, British true-crime podcasters Aaron Korey (played by Jefferson Hall) & Dana Haines (played by Rhian Rees) arrive in Haddonfield & travel to Smith's Grove Sanitarium, trying to speak with Michael before he is transferred to a maximum-security facility. Dr. Ranbir Sartain (played by Haluk Bilginer), who has treated Michael for some time, informs them that Michael refuses to speak. Even though Aaron & Dana have his mask, Michael refuses to speak with them.

That night, Michael, along with other inmates, are transported by bus to the maximum-security facility. However, the bus crashes, then the security guards are killed, then the other inmates litter the road. Michael travels back to Haddonfield to continue his horrific crimes.

This is the moment Laurie has been waiting for. She has been waiting for Michael to escape so she can kill him, ending his reign of terror. Also on his trail is Sheriff Frank Hawkins (played by Will Patton), who arrested Michael in 1978. But with a major high school Halloween party that night, along with other teenagers, including Allyson's best friend, Vicky (played by Virginia Gardner), babysitting & being promiscuous, the manhunt for him may be much more arduous than they think.

The cast is amazing. Jamie Lee Curtis is phenomenal, cementing her status as the original scream queen. Judy Greer does some good supporting work. And Andi Matachak shows some promise that she could become a scream queen one day. But this belongs to Curtis & her stellar performance.

David Gordon Green's direction is great. There are some issues with some jump scares, but Green makes sure to really emphasize on a sense of dread & terror instead of having a jump scare every minute.

The screenplay by Jeff Faraday, Danny McBride & David Gordon Green is very good. The plot is a bit derivative, & the characterization is a bit thin outside of the main characters, but the narrative is thoroughly intriguing.

Michael Simmonds' cinematography is astonishing. The camerawork is fantastic, especially one tracking shot that is not only technically impressive, but strengthens the sense of dread.

And the score by John Carpenter, Cody Carpenter & Daniel Davies is superb. There are many callbacks to the amazing score of the original Halloween, but it's very fresh, & it makes the mood even more tense.

This is a very good horror film. Although there are some definite flaws, it's still a solid horror film that is better than the majority of modern-day horror films.

Halloween was seen by me at the MJR Marketplace Digital Cinema 20 in Sterling Heights, MI on Friday, October 19, 2018. It is in theaters everywhere. Its runtime is 106 minutes, & it is rated R for horror violence & bloody images, language, brief drug use & nudity.
at October 25, 2018