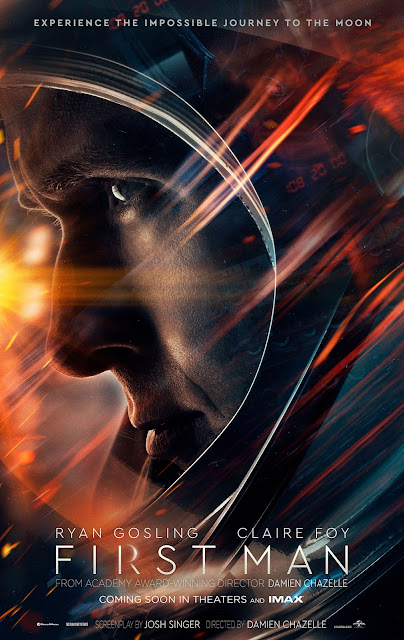 With those words spoken by President John F. Kennedy, the race to get to the Moon was on. Although his goal was not fulfilled in his lifetime, it was eventually fulfilled on July 20, 1969, as Apollo 11, led by Neil Armstrong, Buzz Aldrin, & Michael Collins, landed on the Lunar surface, eventually doing what would be ultimately known as "one small step for man, one giant leap for mankind."

First Man is an enthralling epic about Neil Armstrong's life during the build-up to the Moon landing. Based on the 2005 book First Man by James R. Hansen, & set between 1961 & 1969, the film follows Neil Armstrong (played by Ryan Gosling), a NASA astronaut. After landing an X-15 in the Mojave Desert after some atmospheric troubles, Armstrong is grounded due to possible distractions in his life. Ultimately, there is a major distraction in Armstrong's life: his daughter, Karen (played by Lucy Stafford), has been diagnosed with a brain tumor. Despite his best efforts to find treatment & detail her symptoms, Karen dies.

After the Soviet Union completes the first EVA, in 1965, Armstrong is selected as commander for Gemini 8 with David Scott (played by Christopher Abbott) piloting. Although the launch is successful, problems within the system force the mission to be aborted.

Finally, in 1968, Armstrong is selected by former Mercury Seven astronaut & then-Astronaut Chief Deke Slayton (played by Kyle Chandler) to command Apollo 11, with Buzz Aldrin (played by Corey Stoll) & Michael Collins (played by Lukas Haas) joining him. This is schedule to be the first lunar landing. As this comes with a lot of risk, Janet is worried about the possibility that Armstrong may not make it back home. Now, Armstrong, along with the rest of the crew, must make sure that this mission goes well.

The cast is fantastic. Ryan Gosling gives one of his best performances yet. It's very introspective & subdued compared to his other performances, but it's still one of his best. Claire Foy is phenomenal, defying many tropes that the "long-suffering wife of a important man" character is plagued with in many biopics. The rest of the cast is great, but it's Gosling & Foy's show.

Damien Chazelle's direction is phenomenal. Chazelle delivers a lot of white-knuckle intensity to the film from start to finish, & also adds more of a personal feel to the film, which works out immensely.

Josh Singer's screenplay is amazing. Singer manages to avoid many of the biopic tropes, instead going for more of a realistic & gritty approach, which definitely makes the film even better.

Linus Sandgren's cinematography is spectacular. Sandgren's camerawork has an amazingly crisp 1960s feel to it, further immersing us in the time period. And the use of shaky cam in the launch sequences adds even more to the film.

Tom Cross' editing is excellent. There aren't any bad edits to be found, & the film is methodically slowly paced to let the events slowly unfold before our eyes.

Mary Zophres' costume design is superb. The costumes are period-accurate, immersive, & have a very common & timeless quality to them.

Nathan Crowley's production design is terrific. The sets are period-accurate & immersive, especially the insides of the space shuttles.

The sound design is impeccable. The sounds made by the space shuttles as they launch into space are so immersive, making you feel as if you're only a few hundred feet away from the launch.

The visual effects are astonishing. There was no green screen used for the film, so they used both old & new techniques for the effects, & it works out perfectly, as you feel like you're right there in space with the astronauts.

First Man was seen by me at the MJR Marketplace Digital Cinema 20 in Sterling Heights, MI on Friday, October 12, 2018. It is in theaters everywhere. Its runtime is 141 minutes, & it is rated PG-13 for some thematic content involving peril, & brief strong language.
at October 21, 2018